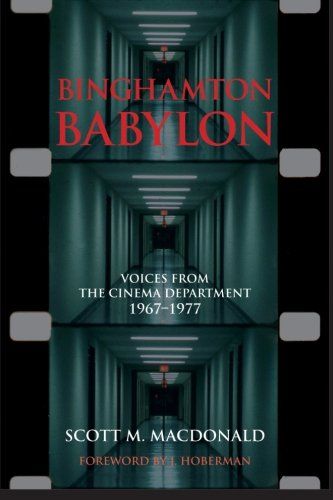 In Binghamton Babylon, Scott M. MacDonald documents one of the crucial moments in the history of cinema studies: the emergence of a cinema department at what was then the State University of New York at Binghamton (now Binghamton University) between 1967 and 1977. The department brought together a group of faculty and students who not only produced a remarkable body of films and videos but went on to invigorate the American media scene for the next half-century. Drawing on interviews with faculty, students, and visiting artists, MacDonald weaves together an engaging conversation that explores the academic excitement surrounding the emergence of cinema as a viable subject of study in colleges and universities. The voices of the various participants—Steve Anker, Alan Berliner, Danny Fingeroth, Hollis Frampton, Ernie Gehr, J. Hoberman, Ralph Hocking, Ken Jacobs, Bill T. Jones, Peter Kubelka, Saul Levine, Camille Paglia, Phil Solomon, Maureen Turim, and many others—tell the story of this remarkable period. MacDonald concludes with an analysis of the pedagogical dimensions of the films that were produced in Binghamton, including Larry Gottheim’s Horizons; Jacobs’sTom, Tom, the Piper’s Son; Gehr’s Serene Velocity; Frampton’s Critical Mass; and Nicholas Ray’s final film, We Can’t Go Home Again.

“This is an important episode in film history and in particular the history of the cinematic avant-garde, and it is exciting to have so many voices from the time assembled in one volume. A terrific book!” — Dana Polan, Cinema Studies, New York University