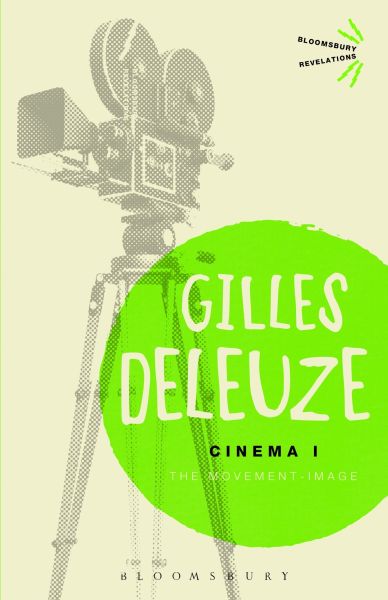 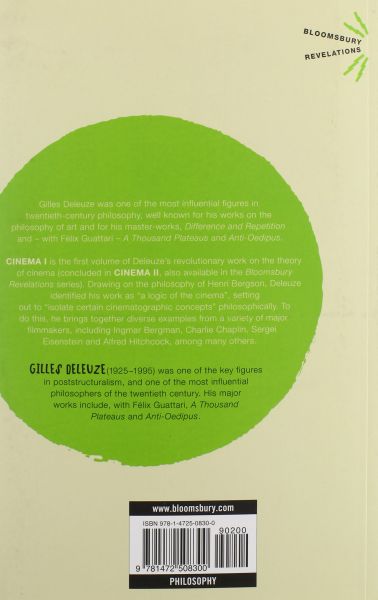 Cinema I: The Movement-Image

Be the first to review this product
£16.99
by Gilles Deleuze
Details
Additional Information
Customer Reviews
Details

Description: Gilles Deleuze was one of the most influential figures in twentieth-century philosophy, well known for his works on the philosophy of art and for his master-works, Difference and Repetition and - with Felix Guattari - A Thousand Plateaus and Anti-Oedipus. Cinema I is the first volume of Deleuze's revolutionary work on the theory of cinema (concluded in Cinema II, also available in the Bloomsbury Revelations series). Drawing on the philosophy of Henri Bergson, Deleuze identified his work as "a logic of the cinema", setting out to "isolate certain cinematographic concepts" philosophically. To do this, he brings together diverse examples from a variety of major filmmakers, including Ingmar Bergman, Charlie Chaplin, Sergei Eisenstein and Alfred Hitchcock, among many others.

Review: "Cinema I and Cinema II must be understood as works of philosophy, not of film criticism. They are Deleuze's reflection on the new ways the cinema enables us to think about time and movement, opening up insights into semiotics and our ideological construction of a world increasingly experienced through representational media... The main purpose of these books is to identify and explore the implications of a vital shift from classical, pre-World War II cinema of the movement-image to post-World War II cinema of the time-imaging... "Cinema 1 and Cinema 2 perhaps ultimately have more to teach us about philosophy, conceptions of subjectivity, and hermeneutics than to say something about any specific film. These books are challenging because they develop their own vocabulary in dialogue with the history of philosophy, and they assume a wide knowledge of films from the Soviet, European and Hollywood traditions. They reward the effort required to read them, however, for the original tools with which they provide us to understand cinema and semiotics more generally. Deleuze concludes that it is important to think of cinema not as a language, but as a way of bringing to light 'intelligible content' which is a condition through which language constructs its objects (Cinema 2, p.251). Thus, purely optical and sound images which do not extend into action might be one way in which aesthetics might help us break outside of the determining structure of linguistic systems, enabling us to imagine the world otherwise. Deleuze helps us to see cinema as more than just a collection of texts but as additionally 'a new practice of images and signs, whose theory philosophy must produce as conceptual practice' (Cinema 2, p. 269)."- Sherryl Vint, Film International, Issue 27v -- Film International

Contents: Preface to the English edition \ Translators' Introduction \Preface to the French Edition \ 1. Theses on Movement: First Commentary onBergson \ 2. Frame and Short, Framing and Cutting \ 3. Montage \ 4. TheMovement-Image and its Three Varieties: Second Commentary on Bergson \ 5. ThePerception-Image \ 6. The Affection-Image Face and Close-Up \ 7. TheAffection-Image: Qualities, Powers, Any-Space-Whatevers \ 8. From Affect toAction: The Impulse Image \ 9. The Action-Image: The Large Form \ 10. The Action-Image:The Small Form \ 11. Figures, or the Transformation of Forms \ 12. The Crisisof the Action-Image \ Glossary \ Notes \ Index.

Author Biography: Gilles Deleuze (1925-1995) was one of the key figures in poststructuralism, and one of the most influential philosophers of the twentieth century. His major works include, with Felix Guattari, A Thousand Plateaus and Anti-Oedipus.