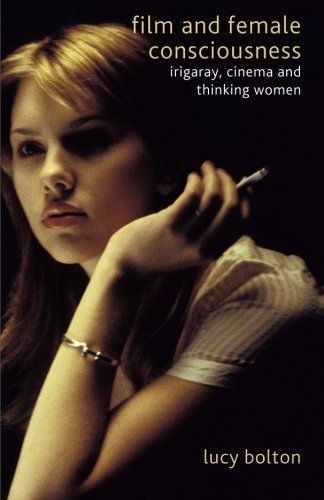 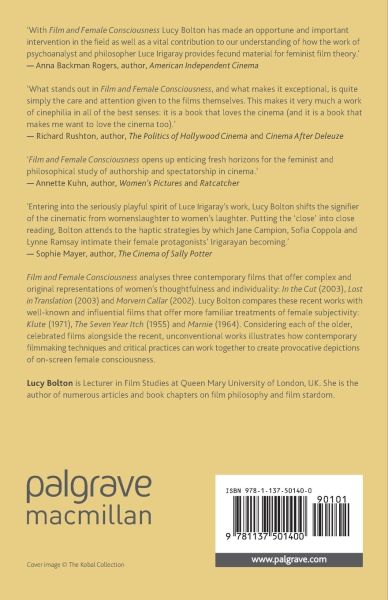 Be the first to review this product
£20.00
By Lucy Bolton
Details
Additional Information
Customer Reviews
Details

Description: Film and Female Consciousness analyses three contemporary films that offer complex and original representations of women's thoughtfulness and individuality: In the Cut (2003), Lost in Translation (2003) and Morvern Callar (2002). Lucy Bolton compares these recent works with well-known and influential films that offer more familiar treatments of female subjectivity: Klute (1971), The Seven Year Itch (1955) and Marnie (1964). Considering each of the older, celebrated films alongside the recent, unconventional works illustrates how contemporary filmmaking techniques and critical practices can work together to create provocative depictions of on-screen female consciousness. Bolton's approach demonstrates how the encounter between the philosophy of Luce Irigaray and cinema can yield a fuller understanding of the fundamental relationship between film and philosophy. Furthermore, the book explores the implications of this approach for filmmakers and spectators, and suggests Irigarayan models of authorship and spectatorship that reinvigorate the notion of women's cinema.

Review: 'Film and Female Consciousness opens up enticing fresh horizons for the feminist and philosophical study of authorship and spectatorship in cinema.' - Annette Kuhn, Queen Mary, University of London, UK 'Entering into the seriously playful spirit of Luce Irigaray's work, Lucy Bolton shifts the signifier of the cinematic from womenslaughter to women's laughter. Putting the 'close' into close reading, Bolton attends to the haptic strategies by which Jane Campion, Sofia Coppola and Lynne Ramsay intimate their female protagonists' Irigarayan becoming. Gestural, chromatic, musical, and tactile communion are echoed in Bolton's lucid readings, which will inspire future filmmakers, as well as film theorists, of all genders to enter, like Frannie, Charlotte and Morvern, a hopeful, feminist future.' - Sophie Mayer, author, The Cinema of Sally Potter Film and Female Consciousness is a fresh and engaging approach to what is often considered a well-trodden and even passe subject in film studies. Bolton's book suggests a potential methodology for the future of feminist film criticism in a way that opens up new directions in a discipline that had contented itself with circuitous discussions surrounding the dearth of interesting and new representations of female subjectivity, identity and interiority in mainstream female characters. - Alexia Bowler, Feminist & Women's Studies

"With Film and Female Consciousness Lucy Bolton has made an opportune and important intervention in the field as well as a vital contribution to our understanding of how the work of psychoanalyst and philosopher Luce Irigaray provides fecund material for feminist film theory." - Anna Backman Rogers, author, American Independent Cinema "What stands out in Film and Female Consciousness, and what makes it exceptional, is quite simply the care and attention given to the films themselves. This makes it very much a work of cinephilia in all of the best senses: it is a book that loves the cinema (and it is a book that makes me want to love the cinema too)." - Richard Rushton, author, The Politics of Hollywood Cinema and Cinema After Deleuze

Contents: Acknowledgements Abbreviations Introduction 'Frozen in Showcases': Feminist Film Theory and the Abstraction of Woman The Camera as an Irigarayan Speculum In the Cut: Self-Endangerment or Subjective Strength? Lost in Translation: The Potential of Becoming Morvern Callar: In a Sensory Wonderland Architects of Beauty and the Crypts of Our Bodies: Implications for Filmmaking and Spectatorship Concluding Remarks: The Object is Speaking Bibliography Filmography Discography Notes Index

Author Biography: Lucy Bolton is Lecturer in Film Studies at Queen Mary University of London, UK. She is the author of numerous articles and book chapters on film philosophy and film stardom, and the co-editor (with Christina Siggers Manson) of Italy on Screen: National Identity and Italian Imaginary (2010).