Media Matter: The Materiality of Media, Matter as Medium
28.99 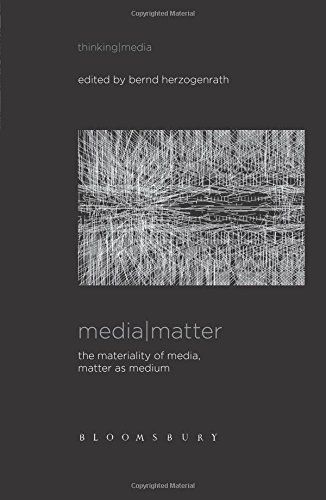 Media Matter: The Materiality of Media, Matter as Medium

Description: Launching Bloomsbury's Thinking Media series, Media Matter introduces readers to the nascent field of media-philosophy. Contributors urge readers to re-adjust their ideas of Media Studies, by extending the understanding of "medium" to include a concept of materiality that also includes "non-human" transmitters (elements such as water, earth, fire, air) and also by understanding media not only in the context of cultural or discursive systems or apparatuses, relays, transistors, hardware or "discourse networks," but more inclusively, in terms of a "media ecology." Beginning with more general essays on media and then focusing on particular themes (neuroplasticity, photography, sculpture and music), especially in relation to film, Herzogenrath and the contributors redefine the concept of "medium" in order to think through media, rather than about them.

Review: media|matter continues the important work on materiality of media. The chapters offer inspiring and rich analyses into how voice and sound, film and text open up to realities unthought of. The book is an important addition to the growing body of work on new materialism and is of interest to sound, film and media studies students and scholars. Jussi Parikka, Professor of Media & Design, Winchester School of Art, University of Southampton, UK, and author of What is Media Archaeology? and A Geology of Media Media and communications' role in the world has been a dominant area of research-perhaps the dominant area of research-for the past hundred years. Yet strangely, the material world itself has often seemed absent, except as relegated to a support for technical or social developments. Now, however, things are changing. Existing concepts of the importance and nature of the material world are being questioned in the harsh light of uncertain futures. With this, the very concept of media is morphing into something new. Media|Matter takes up the dramatic challenges this poses to some of the central assumptions of media studies. Bernd Herzogenrath has brought together a wonderful collection of essays that document the move beyond the cultural, discursive and even changing technical limits of media studies. Media are rethought in relation to the very materiality of the world. Media|Matter thus wonderfully reassesses the status and condition of media studies in order to take it into the problematic (in both the material and conceptual senses) future that the world now faces. Media|Matter also challenges media disciplinarities in favour of the much fuller and now necessary transdisciplinarity to which media studies has long aspired. All kinds of image are thought again in the light of the material world (as in Bill Morrison, Herzogenrath, Lorenz Engell, Florian Hoof and Eva Ehninger), as are traditional and 3D printing (Garrett Stewart). Questions of performativity (Katerina Krtilova), or a material semiotics, are presented, along with a rethinking of the brain as material medium in the midst of both affects and objects (Benjamin Betka). The materialities of voice (Milla Tiainen) and music (Sebastian Scherer), along with key philosophy debates in art, for example between accelerationism and new materialism (Stephen Zepke). Reading media|matter is like being splashed in the face with cold water and looking up to see the world anew Andrew Murphie, Associate Professor of Arts and Media, University of New South Wales, Australia In recent years the concept of medium (and with it the whole field of media studies) has been repeatedly redefined, particularly by scholars in the German-speaking countries. Media|Matter is an original and important contribution to that process of redefinition. Contributors to this anthology address a range of media forms and practices, including print, film, video and performance art, and sonic art. They apply and often critique a range of theoretical approaches, including media philosophy, systems theory, actor-network theory, feminist theory, the work of Deleuze and Guattari, the art theory of Kraus and Foster, and more. Their varied contributions share a foundational concern with the question of the materiality of media: each essay seeks within its domain to explore the form and matter of contemporary media without resorting to either technological or cultural determinism. Everyone interested in the current condition and the future of media studies should read Media|Matter. Jay David Bolter, Wesley Chair of New Media, Georgia Institute of Technology, USA The non-existence of media - as an essential or arche-logical category - clearly creates a vacuum that demands to be filled, in this instance with an almost kaleidoscopic variety of investigations, addressing media materiality in text, film, art, sound , and meta/physics. Beyond simply registering an obligatory 'turn' in media studies, the contributors demonstrate what is to be gained in the fundamental re-thinking of mediation from which media|materiality proceeds. Stuart Moulthrop, Professor of English, University of Wisconsin-Milwaukee, USA, and author of Victory Garden

Author Biography: Bernd Herzogenrath is Professor of American Studies at the University of Frankfurt, Germany.