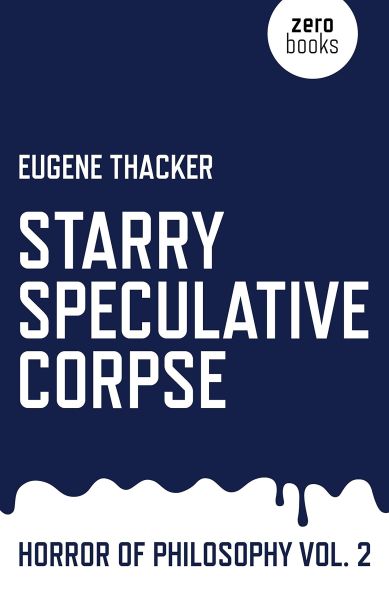 Be the first to review this product
£10.99
By Eugene Thacker
Details
Additional Information
Customer Reviews
Details

Description: Could it be that the more we know about the world, the less we understand it? Could it be that, while everything has been explained, nothing has meaning? Extending the ideas presented in his book In The Dust of This Planet, Eugene Thacker explores these and other issues in Starry Speculative Corpse. But instead of using philosophy to define or to explain the horror genre, Thacker reads works of philosophy as if they were horror stories themselves, revealing a rift between human beings and the unhuman world of which they are part. Along the way we see philosophers grappling with demons, struggling with doubt, and wrestling with an indifferent cosmos. At the center of it all is the philosophical drama of the human being confronting its own limits. Not a philosophy of horror, but a horror of philosophy. Thought that stumbles over itself, as if at the edge of an abyss. Starry Speculative Corpse is the second volume of the "Horror of Philosophy" trilogy, together with the first volume, In The Dust of This Planet, and the third volume, Tentacles Longer Than Night.

Author Biography: Philosopher Eugene Thacker thinks and writes about a world of natural disasters, emerging pandemics, and the looming threat of extinction. Existence, he writes, is becoming increasingly -unthinkable.- He has written on a range of topics, from philosophy to science fiction and horror. Thacker is the author of a number of books, including After Life (2010), and In the Dust of this Planet in his Horror of Philosophy series. He is Associate Professor of Media Studies at The New School in New York.