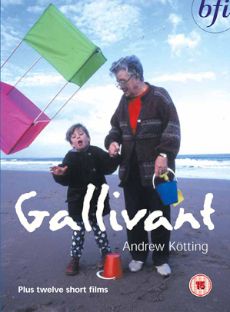 To gallivant, is, according to its dictionary definition 'to wander about, seeking pleasure or diversion', and this is just what artist turned filmmaker Andrew Kötting set out to do on this zig-zagging 6000 mile trip around Britain's coastline.

Part home movie, part road movie, Kötting's riveting and eccentric film stars his 85-year-old grandmother Gladys - opinionated, bursting with anecdotes and contradictory reminiscences – and his eight-year-old daughter Eden. As the journey begins, the two are practically strangers, but by the end, 'Little Eden' and 'Big Granny' have struck up a warm bond, a relationship lent added poignancy by the fact that Eden has Joubert Syndrome, a condition that affects her speech and movement so she communicates through sign language.

Not only do the trio discover more about themselves along the way, but they also find that the seaside communities host a wealth of eccentrics. Kötting uses 16mm and Super 8 filmstock, found footage, timelapse photography and much non-synchronous sound to reveal a wonderland of bizarre traditions and quirky strangers.

Kötting's Gallivant, like Patrick Keiller's London and Robinson in Space, belongs to a cinema of psychogeography, exploring British landscape and culture with wit and imagination. Released to much critical acclaim, Gallivant scooped the Best New Director Award at its Edinburgh Film Festival premiere. Andrew Kötting went on to make his first fiction feature film, This Filthy Earth in 2001. More recently he has returned to mixed-media projects.

This Our Still Life