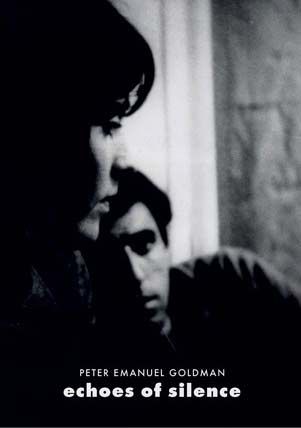 Born in New York in 1939, Peter Emanuel Goldman is an important, yet mostly unknown, filmmaker of American cinema. Echoes of Silence - a movie with no dialogue - was shot in 1964 on a small budget in Greenwich Village, following three wandering young men. Banned in France and Italy, it nevertheless won the special prize at Pesaro Film Festival in 1966, awarded by a jury including Godard, Bellochio and Bertolucci. While Wheel of Ashes revisits themes similar to those of its predecessor, Saint-Germain des Pres replaces the New York neighbourhood, dialogue enters into the silence, and our hero pursues a quest for love.

Peter Emmanuel Goldman's rarely screened debut, an underappreciated landmark of the New American Cinema, chronicles the lives of twenty-somethings adrift in New York City, finding tremendous pathos in the smallest moments: a furtive glance across a museum gallery, girls putting on makeup, a stroll beneath the pulsing lights of Times Square marquees. Composed with a lo-fi purity and bereft of diegetic sound, its shadowy images of youthful flaneurs are paired with evocatively hand-painted title cards and a dynamic soundtrack drawn from the artist's LPs that, when combined, conjure up a ballad of sexual dependency like none other.

"It is not very often a new film-maker with so much promise comes on to the scene. There are several things that are good about Goldman. First, the mastery and feeling that he managed to put into his first work. Second, the freshness he is brining into the weakest part of the New American Cinema, the story cinema." - Jonas Mekas, Village Voice, 1965

"Sometimes a film appear that is like no other... Filmed and edited with numbing suggestive force... each instant is felt so intensely that motion is practically melded into stillness itself... The film is beautiful and lyrical... a beauty that is inseperable from the despair of its people." - James Stoller, Moviegoer, 1966

"Peter Goldman is the most exciting new filmmaker in recent years. Echoes of Silence, his first film, is a stunning piece of work." - Susan Sontag