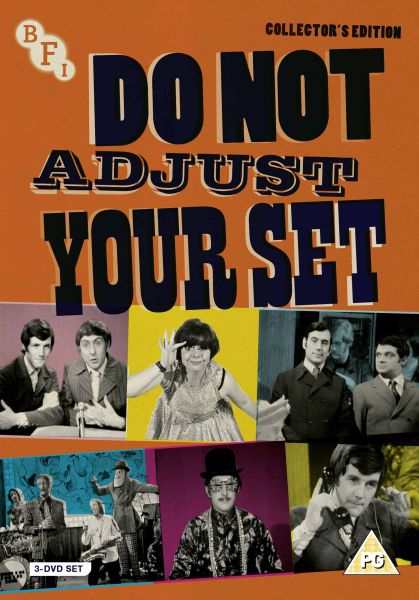 Do Not Adjust Your Set (3-Disc DVD Set)

The most definitive release to date of the ground-breaking sketch show, one of the most innovative and influential British comedy series of the Swinging Sixties

Innovative and influential, and originally envisaged as children’s show, Do Not Adjust Your Set was a madcap early-evening comedy sketch show that quickly acquired a cult following with Swinging Sixties adults, who rushed home from work to see it.

Written by and starring Michael Palin, Terry Jones, Eric Idle, with great performances and additional material by David Jason and Denise Coffey, it also provided an early showcase for the hilarious animations of Terry Gilliam, and the brilliantly bizarre musical antics of the legendary Bonzo Dog Doo Dah Band.

For the first time anywhere, all the fully existing episodes from the Rediffusion and Thames series of the show are brought together at last in one place for a deluxe package that includes five episodes new to DVD, at least two of which were previously thought lost, alongside new interviews with series creator and producer Humphrey Barclay, writer and performer Michael Palin, uninvited guest star Tim Brooke-Taylor, animations from Terry Gilliam’s personal film collection, and a new documentary about the Bonzo Dog Doo-Dah Band, featuring new interviews with 1960s originators and key personnel Neil Innes, Rodney Slater, Roger Ruskin-Spear and ‘Legs’ Larry Smith.

How I Won the War (Dual Format Edition)