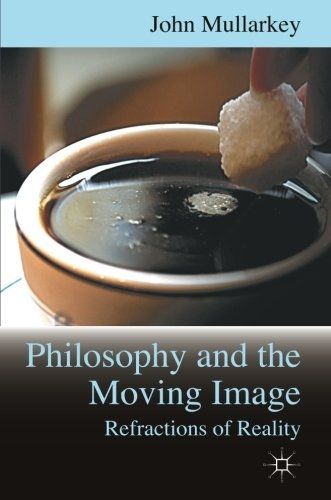 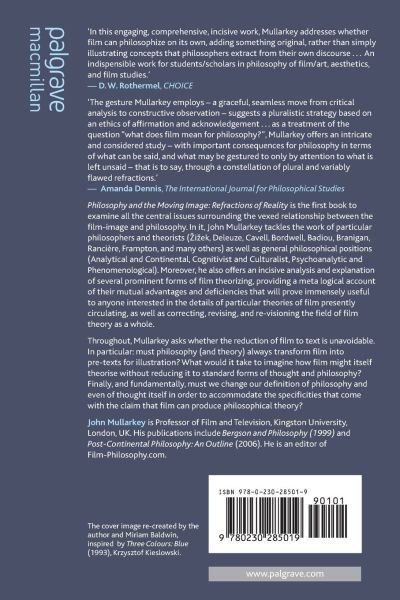 Refractions of Reality: Philosophy and the Moving Image

Be the first to review this product
£25.00
By John Mullarkey
Details
Additional Information
Customer Reviews
Details

Description: This is the first book to explore all central issues surrounding the relationship between the film-image and philosophy. It tackles the work of particular philosophers of film (Zizek, Deleuze and Cavell) as well as general philosophical positions (Cognitivist and Culturalist), and analyses the ability of film to teach and create philosophy.

Review: 'In this engaging, comprehensive, incisive work, Mullarkey addresses whether film can philosophize on its own, adding something original, rather than simply illustrating concepts that philosophers extract from their own discourse An indispensible work for students/scholars in philosophy of film/art, aesthetics, and film studies.' D.W.Rothermel, CHOICE '...addresses the question of the relation between art and philosophy - the age-old problem of aesthetics - in an entirely original manner by examining how film changes the terms of this debate.' '...to summarize Mullarkey's text in terms of his criticism of other film theorists does not do justice to the intricate readings and impressive scope of Mullarkey's overall approach. His engagement with figures such as Jacques Ranciere, Edward Branigan, Joseph Anderson, Badiou, and Cavell (to name a few) lead him to fascinating 'partial' observations on the nature of film.' 'The gesture Mullarkey employs - a graceful, seamless move from critical analysis to constructive observation - suggests a pluralistic strategy based on an ethics of affirmation and acknowledgement.' '...as a treatment of the question 'what does film mean for philosophy?', Mullarkey offers an intricate and considered study - with important consequences for philosophy in terms of what can be said, and what may be gestured to only by attention to what is left unsaid - that is to say, through a constellation of plural and variably flawed refractions.' - Amanda Dennis in The International Journal for Philosophical Studies 'This book, in some sense, brings to an end a certain phase of film theorizing and instead looks toward something quite new: how theories have been written and how they may be written, how they fall into types, how these types are filling out not a logical grid but a grid of the anxieties we feel, and the defenses we erect toward the everyday. A wonderful, ground-breaking book.' - Edward Branigan (University of California, Santa Barbara), author of Projecting a Camera: Language-Games in Film Theory and Narrative Comprehension and Film 'Highly original both in its concern for avoiding the illustrative approach generally favoured by philosophers, and in the speculative ambition that looms behind the critical edge of its readings of contemporary film- philosophers. The very question "when does the film itself happen?" is a fundamental one, which is rarely addressed. Mullarkey is opening the door to a brand new type of philosophical engagement with films.' - Elie During (Universite de Paris X-Nanterre), author of Matrix: Machine philosophique 'Mullarkey brings an informed, critical view to a number of theories from both the Continental tradition (his specialization) and the Anglo-American tradition...Refractions of Reality is an original and valuable contribution to the field of film philosophy...It is perhaps most valuable in its highly successful dislocation of the rigid, myopic perspective of so many contemporary theories' - Joseph Mai, Notre Dame Philosophy Reviews

Contents: Acknowledgements Preface: The Film-Envy of Philosophy Introduction: Nobody Knows Anything! Illustrating Manuscripts Bordwell and Other Cogitators Zizek and the Cinema of Perversion Deleuze's Kinematic Philosophy Cavell, Badiou, and Other Ontologists Expanded Cognitions and the Speeds of Cinema Fabulation, Process and Event Refractions of Reality Or, What is Thinking Anyway? Conclusion: Code Unknown - A Bastard Theory for a Bastard Art Notes Bibliography Index

Author Biography: JOHN MULLARKEY is Professor of Film and Television, Kingston University, London, UK. His publications include Bergson and Philosophy (1999) and Post-Continental Philosophy: An Outline (2006). He is an editor of Film-Philosophy.com.