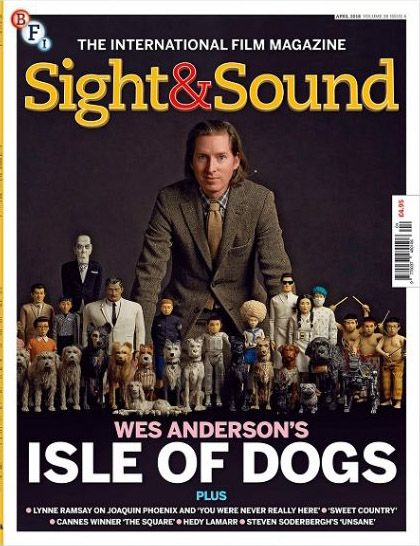 Our April issue returns to perennial cinephile favourite Wes Anderson, whose newest film, Isle of Dogs, is another stop-motion animation in the manner of Fantastic Mr. Fox (2009), this time set in a futuristic, dystopian Japan. Nick James sat down with Anderson, along with co-writers Roman Coppola, Jason Schwartzman and Kunichi Nomura, following the film’s premiere in Berlin, where he revealed a number of Isle’s inspirations, particularly citing Akira Kurosawa’s ‘city films’ such as Drunken Angel (1948), High and Low (1963) and, appropriately, Stray Dog (1949).

He also stresses the importance of traditional Japanese art to the film, noting “in New York we went to the Met museum… where they have the Hokusai and the Hiroshige prints. Those were a big influence on the movie. That kind of imagery became something we referred to all the time,” something reflected in the characteristically meticulous ‘Anderson-esque’ compositions in Isle of Dogs, which here frequently suggest woodblock paintings.

Another rather painterly new film is the Australian western Sweet Country by indigenous filmmaker Warwick Thornton, which details the country’s turbulent, often unmentioned history with racism and violence through the story of an indigenous farmhand couple on the run, suspected in the murder of a white man. Interviewed by Trevor Johnston, Thornton talks about the importance of telling these stories for him as well as the indigenous actors involved, saying of the cast, “they’re from the tribes, so the history lessons we’re dealing with here, their people have been through that… This is your family’s story, it’s really important that we tell it.” He adds, “Indigenous filmmakers, not only in Australia, now have a voice and the world is listening, because people want to hear a different opinion on the past, the present, and maybe even the future.”

Also featured here is an interview with Lynne Ramsay about her film You Were Never Really Here, starring Joaquin Phoenix. The film, which centres on a suicidal ex-marine hired to rescue a young girl from a sex-trafficking ring, seems at first glance to be a major genre departure for the director, whose previous three features are mainly domestic dramas; but Leigh Singer reveals that it sticks closer to Ramsay’s strengths than it appears, and provides an opportunity for a creative watershed for the director, whose career has been plagued by abandoned projects and long gaps between films.

Ruben Östlund’s Cannes- and now Oscar-lauded The Square is also examined in this issue by Jonathan Romney, who had a chance to speak with the director about his art world satire. The film, Östlund’s follow-up to his lauded Force Majeure (2014), follows a “modish, dapper, impeccably high-minded and socially responsible” gallery director who is nonetheless “comically unglamorous” in how he deals with the various comic crises he encounters. Speaking on one of the film’s central themes, social shame, Östlund says, “Human beings have a really strong capacity for shame. We actually commit suicide rather than live with shame.”

In a more retrospective direction, Christina Newland uses the new documentary Bombshell: The Hedy Lamarr Story as a jumping off point to address the (often unsung) contribution of American women writers and producers during World War II. Newland points out that the departure of many men for the war effort left openings for as many women to fill their roles, allowing for such classics as the Catherine Turney-penned Mildred Pierce (1945), Virginia Van Upp-produced Gilda (1946) and more. Though they continued to face challenges in Hollywood, the opportunity of the war was able to launch many a career past the glass ceiling.

Also in these pages is a rundown of the precarious situation and uncertain future of London’s Cinema Museum, the impending closure of which threatens the preservation of a wealth of rare film memorabilia. Plus, a glance at the unexpectedly intertwined but sharply, surprisingly contrasted life stories and career trajectories of actresses Lena Horne and Susan Hayward. And, of course, a quick rundown of the highlights of this year’s Berlinale slate courtesy of Nick James.

Our reviews section catalogs and critiques this month’s theatrical releases, highlighting in particular Black Panther, The Third Murder and Unsane, and in home entertainment we take an opportunity to celebrate some of the lesser-seen, late-career works by French director Henri-Georges Clouzot. We also look at some upcoming film books, including a thorough biography of the great but often overshadowed Michael Curtiz, as well as a invigoratingly philosophical examination of Vertigo (1958).

All this and much more besides…