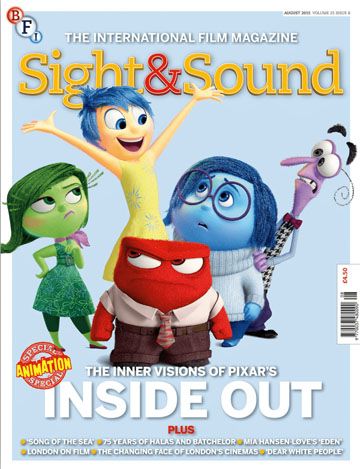 Our special animation issue gets in touch with its feelings via Pixar’s return to excellence Inside Out, reclaims Irish folklore with Tomm Moore’s Song of the Sea, and hails the spirit of Halas & Batchelor, Britain’s indie animators who could.

Pete Docter’s Inside Out, which explores a young girl’s growing pains from the perspective of the animated emotions inside her mind, is a spellbinding return to form for Pixar Studios, offering a remarkably thorough exploration of the human psyche and a shrewd examination of the value of sadness in everyday life. By Jonathan Romney.

A life in pictures

British animators with artistic aspirations beyond the corporate sector have rarely found it easy to make a living in the UK, which makes the longevity and creative tenacity of the much missed company founded by John Halas and Joy Batchelor 75 years ago all the more worthy of celebration. By Jez Stewart.

Once upon a time in the west

Tomm Moore’s deeply affecting animated fantasy Song of the Sea taps in to the spirit of Studio Ghibli with its family-oriented tale of mythical sea creatures, faerie folk and a family in crisis – and, in the process, seeks to reclaim Irish folklore from the realms of tourist-tat leprechauniana. By Trevor Johnston.

Stuck in the groove

Mia Hansen-Løve’s Eden, which charts the highs and lows of a DJ whose obsession with dance music proves his eventual undoing, brings a documentary sensibility and musical sophistication to its exploration of the French club scene over two decades. By Frances Morgan.

New cinemas, mostly of the swish, upmarket and upgraded variety, began to appear across London a few years back and in the last 18 months this trend has accelerated to such an extent that a new standard of comfort and immersion has become the norm. That cinemas need to fight harder for our attention in the hand-held screen age is clear, but is this enriched yet often expensive experience the way to go? After all, there are other approaches than the ‘best of everything’ model. Edward Lawrenson reports on five new London cinemas, which set out to unpick the issues behind this welcome building boom.

London is haunted by its film locations, but as gentrification and modernity alter the old fabric of the city, the films that were once shot there offer not only a vivid snapshot of the past but also a history lesson that shows us how we got to where we are today. By Danny Leigh.