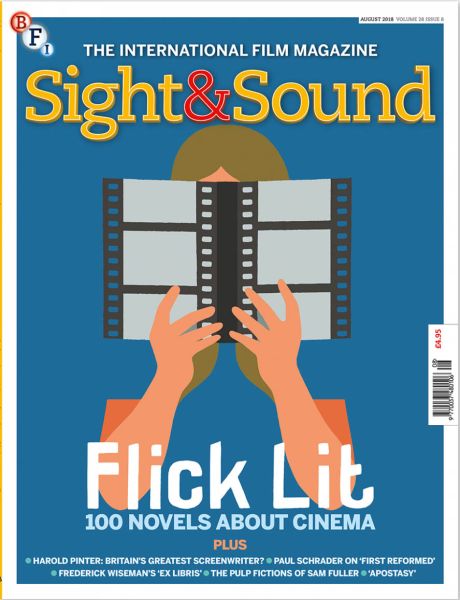 Flick lit: S&S contributors pick the 100 greatest novels and short stories about filmmaking, from Hollywood to Bollywood via Britain, France, Germany, Italy and beyond.

Sight & Sound gets bookish this month as our contributors select 100 novels on cinema. In a special summer feature, writers wax lyrical about their favourite novels and short stories about filmmaking, from Hollywood to Bollywood and beyond.

In his introduction, Nick James muses on literarature’s (occassionally ambivalent) “love and fascination for what ends up on the screen”. Ultimately, he argues, “the proof is in the amazing variety of fictions that use film as a subject.” The works under discussion include Blonde (2000) by Joyce Carol Oates, The Day of the Locust (1939) by Nathanael West, The Accidental (1995) by Ali Smith, The Disenchanted (1950) by Budd Schulberg, Eve’s Hollywood (1974) by Eve Babitz, Flicker (1991) by Theodore Roszak, The Last Tycoon (1941) by F. Scott Fitzgerald, Ponti (2018) by Sharlene Tao, Wise Children (1991) by Angela Carter and many, many more…

Critic, screenwriter and director Paul Schrader has long been fascinated with questions of spirituality and tormented loners. His latest film draws these threads together. First Reformed tells the tale of an angry Christian Pastor (Ethan Hawke) who has a crisis of faith. “I had never intended to write or direct such a fllm,” he confesses to Philip Concannon. “I was too intoxicated by action and empathy, sex and violence.”

With crisp dialogue that is at once laconic and verbose, Harold Pinter’s phenomenal screenplays, the focus of a forthcoming season of films at BFI Southbank in London, are among the most influential in the English-speaking world. “Pinter’s characters have few words, and yet hardly shut up; they prattle about nothing, but every word is weighted with meaning; they fill the silence, and in doing so create new voids,” writes Robert Hanks.

Daniel Kokotajlo’s Apostasy draws on the director’s experiences growing up as a Jehovha’s Witness, exploring the tensions provoked within a family when a daughter pushes against the strictures of the religion. “I didn’t set out to make an angry film,” he tells Will Massa.

In Jean-Stéphane Sauvaire’s brutal, authentic A Prayer Before Dawn, an expat Brit in a Thai jail has to learn Muay Thai boxing to survive. “I’m trying to find a way to release my own violence,” he explains to Philip Concannon.

To the very end of her life, the great Ukrainian director Kira Muratova remained committed to her fierce, uncompromising vision of cinema. Mark Cousins pays tribute.

Our Home Cinema section features a box-set of films by Samuel Fuller, one of Hollwwood’s maverick talents, the early films of Hou Hsiao-Hsien, and a selection of television dramas – the products of a competition organised by Alan Bleasdale.

Also in this issue: long reviews of Cocote, Ex Libris and Pin Cushion; the haunting, burning imagery of Martha Colburn, the sea as metaphor in film, the symbiotic relationship between fashion and film, the quiet disappointment that closes Splendour in the Grass (1961) and more…