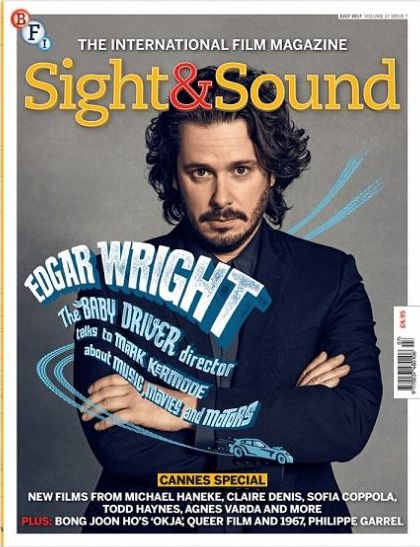 “The most consistently joy-giving run of films of the past ten years.”

Will it surprise anyone to learn that our reviewer is referring to the work of cult director (and this month’s S&S cover star) Edgar Wright, whose sixth feature Baby Driver sees him riffing on the likes of John Landis’s Blues Brothers and Walter Hill’s The Driver in a movie that blends the musical and action-comedy genres?

Ansel Elgort plays the titular getaway driver who uses portable playlists to drown out tinnitus and naively gets in way over his head with Kevin Spacey’s criminal kingpin on the mean streets of Atlanta. Wright’s usual slick, kinetic visuals are married with impressive car chases and action set-pieces spun into carefully choreographed ballets scored to an eclectic soul and funk-dominated soundtrack by the likes of Martha and the Vandellas, Golden Earring, Bob & Earl, Young MC plus many more.

Irresistible? We think so. Mark Kermode sat down with Wright for an in-depth chat about his working methods and influences, walking off the production of Ant-Man and the season of films he’s curated for BFI Southbank: titled Car Car Land.

From Atlanta to the Croisette, where our intrepid critics Nick James and Isabel Stevens delved deep into this year’s Cannes Film Festival offerings across the various strands. It was not an outstanding year by all accounts, with several Cannes regulars – Michael Haneke, Claude Lanthimos, Todd Haynes, Hong Sang Soo, Claude Lanzmann – below their best. But there were still fascinating films to be seen, many of which appeared to invoke the spirit of Luis Buñuel by virtue of their spirited attacks on the bourgeoisie, including Ruben Östlund’s Palme d’Or winner The Square, which makes a bizarre game of consequences out of its plot, with shades of Roy Andersson at times.

Other notable competition entries included Loveless, by the Russian director Andrey Zvyagintsev, whose portrait of a dissolving marriage and a family in crisis suggested wider political resonances; while away from the competition, Isabel Stevens discovered fresh new visions particularly from young women filmmakers such as Chloé Zhao (The Rider) and Rungano Nyoni (I Am not a Witch), and in particular Leonor Serraille’s Jeune Femme, a freewheeling delight about a thirtysomething woman in freefall.

Continuing on a French theme, Adrian Martin and Cristina Alvarez López consider the career of Philippe Garrell (his new film played in Directors’ Fortnight), locating a central, constant situation of “an impulsive, anarchic flight from society, driven by the idealism of romantic love” throughout his oeuvre. Garrell has been making films now for more than 50 years, condensing, refracting and reimagining the highs and lows of his bohemian, marginal life in unforgettable, searing images. Several of Garrell’s films, some not released before in the UK, can be seen on the Mubi platform this month.

Korean maestro Bong Joon-ho’s new film Okja provoked uproar and boos at Cannes this year by virtue of its being a Netflix production solely for the small screen. Leaving aside the controversy over how it’ll be distributed and viewed, Tony Rayns found much to admire in its strange, utterly singular tale of a genetically modified pig being fought over by a conglomerate and a young girl determined to save its life. At times it feels like a kids’ film, but belied by other elements; “the engagement with anti-capitalist activism is, to say the least, ferocious,” says Rayns. Bong is a master filmmaker, so wherever you end up seeing it, top entertainment is guaranteed.

Our final feature this month marks the 50th anniversary of the partial decriminalisation of homosexuality, providing our writer Simon McCallum with a prime opportunity to look back at the portrayal of queer lives in British film and TV of the 1960s and 70s. Prior to Nighthawks, Britain’s first explicitly gay feature film released in 1978, there were numerous courageous attempts to depict the often difficult realities of gay life, especially in Granada’s On Trial series and most daringly perhaps in Victim, starring Dirk Bogarde. McCallum’s article is a salutary reminder of how cinema and TV not only reflects but shapes social and political attitudes.