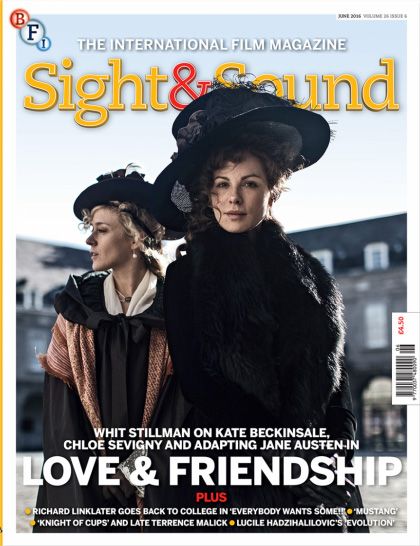 Hold on to your bonnets, for Jane Austen is coming to the screen in a way you’ve never seen her before: downright devious, manipulative and totally unprincipled.

Whit Stillman’s gloriously acid Love &Friendship reunites Kate Beckinsale andChloë Sevigny, some 18 years after their previous Stillman double act in The Last Days of Disco. Beckinsale’s scheming widow Lady Susan is the delightful viper at the heart of this comedy of romantic entanglements. In our extensive cover interview, Stillmantalks about the enduring appeal of Austen, adapting an epistolary novel but abandoning the format and working with Beckinsale, Sevigny and his great ensemble cast. He also roves over his career since his 1990 debut Metropolitan, discussing the art of editing, making a pilot for Amazon and directing an episode of the most un-Stillman-like TV series Homicide: Life on the Streets.

In our other features, Deniz Gamze Ergüven discusses her debut feature Mustang, a modern fairytale about five sisters in rural Turkey; Geoff Andrew looks back on a decade of masterful Romanian cinema, finding that with Radu Jude’s latest film Aferim! it’s still as inventive as ever; Lucile Hadzihalilovic talks about her surreal coming-of-age fantasyEvolution, 11 years in the making; Kent Jones muses over late Terrence Malick films;Jeremy Saulnier delves into his savvy thriller Green Room; and we explore Kathleen Collins’s overlooked 1982 indie gem Losing Ground, which explores issues of class, race and gender with humour and a lightness of touch.

Finally, we couldn’t help but use Richard Linklater’s portrait of Texan university life Everybody Wants Some!! as an excuse to reflect on the larger-than-life genre of American college movies that stretches back to Harold Lloyd and Buster Keaton.

Elsewhere in this month’s issue, we have reviews of every new UK cinema release, including Laurie Anderson’s Heart of a Dog, an essay about death and her terrier Lolabelle, Stephen Frears and Meryl Streep’s Florence Foster Jenkins and Ben River’s Paul Bowles-inspired The Sky Trembles and the Earth Is Afraid and the Two Eyes Are Not Brothers.

Our Home Entertainment section hails a new 4K restoration of Kurosawa Akira’s King Lear adaptation Ran, and the long-awaited release of Edward Yang’s 1991 masterpiece A Brighter Summer Day, as well as selecting some of the most exciting new DVD and Blu-ray releases.

Actresses take over our books section this month with reviews of biographies of Meryl Streep and Elizabeth Taylor, plus a timely study of freelance actresses and the power they possessed in the Hollywood studio system.

We say farewell with our endings column, exploring Tilda Swinton’s silent gaze to the camera at the close of Sally Potter’s Orlando.