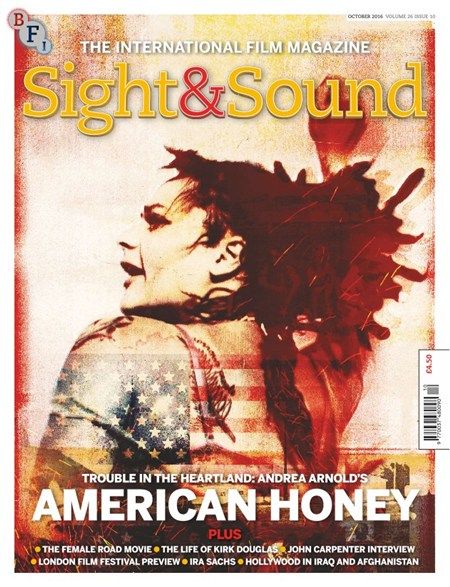 Be the first to review this product
£4.50
Andrea Arnold hits the highway with American Honey, and we answer the question “What kind of dames thumb rides?” Plus the extraordinary career of Kirk Douglas, John Carpenter on his love of Hammer and Howard Hawks, Víctor Erice’s tantalising El sur, Ira Sachs’ Little Men and a recent quartet of limp Hollywood war satires.
Details
Additional Information
Customer Reviews
Details

Rev your engine, roll the windows down and join our open-road odyssey this issue as we talk to Andrea Arnold about her latest film American Honey. Here Arnold leaves behind the British landscapes of Wasp, Red Road, Fish Tank and Wuthering Heights and takes a road trip into the poverty-stricken hinterlands of the US. The film’s American honey is Star, a tenacious 18-year-old loner who wants more from life than playing makeshift mother to two siblings and so joins a ragtag door-to-door sales crew who party and drive their way across the Midwest. In our cover feature Simran Hans explores Arnold’s ongoing exploration of class and female sexuality and talks to the director about discovering her lead and first-time actor Sasha Lane, shooting personal, intimate films in Academy ratio and why all her films have sex scenes.

Cruising alongside, Kim Morgan takes a ride through film history and finds that any assumptions that the road movie is a male genre is a dead end; the road has been a place for cinematic escape, discovery and crisis for many women on screen. “What kind of dames thumb rides?” asks Tom Neal in Edgar G. Ulmer’s Detour. It turns out all kinds, from Claudette Colbert in It Happened One Night (1934) to Quentin Tarantino’s feminist rebels in Death Proof (2007).

Elsewhere, we celebrate the extraordinary career of Kirk Douglas; discuss Little Men with Ira Sachs; explore Víctor Erice’s tantalising incomplete 1983 film El sur; talk to John Carpenter about his love of Hammer and Howard Hawks; and interrogate a recent quartet of limp Hollywood war satires. Plus all the regular reviews of latest releases and more…

After a trio of distinctly British features, Andrea Arnold’s American Honey takes a road trip into the poverty-stricken hinterlands of the US Midwest, following the hard-partying adventures of a young woman who joins a crew of door-to-door magazine subscription sellers. By Simran Hans.

+ Drive, She Said: The road movie is generally associated with men, but the cinema is also full of women who take to the road, whether in pursuit of escape, adventure, crime or just that high-speed thrill ride. By Kim Morgan.

As Kirk Douglas approaches his 100th birthday, we celebrate his extraordinary career, which saw him swiftly ascend the ranks of Hollywood aristocracy following his 1946 debut, with a host of classic roles playing ruthless villains, morally ambiguous mavericks and self-interested sharks. By Philip Kemp.

The burgeoning friendship between a pair of 13-year-old boys is threatened when a bitter feud develops between their parents, in Ira Sachs’s beautifully observed Little Men, set against the background of gentrification and spiralling rents in a middle-class Brooklyn neighbourhood. By Graham Fuller.

Despite having had its funding pulled and its production halted 48 days into an 81-day shoot, Víctor Erice’s tantalising, incomplete 1983 film El sur is still regarded by many as a masterpiece, telling the tale of a young girl’s relationship with her secretive, emotionally distant father. By Mar Diestro-Dópido.

John Carpenter, the one-time powerhouse of genre cinema from Dark Star and Halloween to The Fog and Escape from New York, talks about growing up in the Jim Crow American south, his love of Hammer and Howard Hawks and his favourite scene from any of his films. By Geoffrey Macnab.

In a far cry from the bleak, satirical brilliance of the best Hollywood war films, a recent quartet of limp studio titles shamelessly exploits the instability and conflict in the Middle East to provide little more than an exotic backdrop for the stories of white Americans hoping to find themselves. By Violet Lucca.

Preview: BFI London Film Festival: With a focus on black talent and an S&S Gala presenting the film of 2016, this autumn’s festival is set to be one of the most exciting in years. By Nick James.