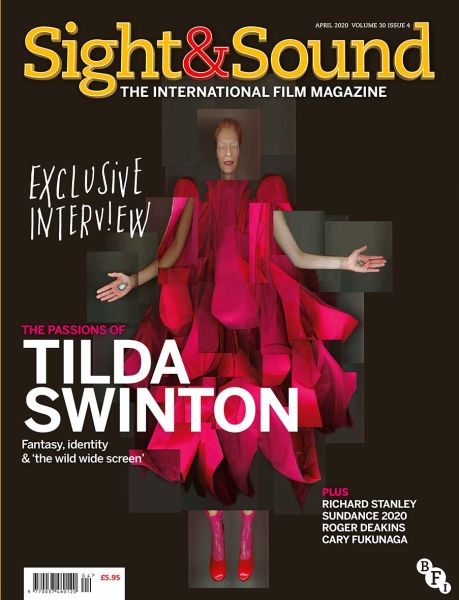 Celebrating Tilda Swinton: the chameleon star opens up on performing, collaborators and the joys of cinema in the S&S Interview – and writes us a poem!

Plus the return of cult director Richard Stanley, Oscar-winning cinematographer Roger Deakins in ten shots, Levin Akin’s gay Georgian love story And Then We Danced, Cary Fukanaga on Brexit-era Bond and Václav Marhoul on his searing child’s-eye view of WWII in The Painted Bird.

In an exclusive interview for our April 2020 issue, we sit down with cinema’s chief chameleon, Tilda Swinton. The queen of transformation even reinvents herself for our cover, in a special shoot with photographer Katerina Jebb. Swinton’s remarkable screen presence has been the engine behind a dizzying variety of films, from early collaborations with Derek Jarman and Sally Potter to forthcoming work by Pedro Almodóvar and Wes Anderson. She talks to Isabel Stevens about Buster Keaton, sharing Tarkovsky’s dreams and why the greatest performance in cinema history is by a donkey.

“I love the fakery and the smoke and mirrors and the make-believe of cinema. It never feels very far from a children’s dressing-up box either with Bong Joon Ho or in Dungeness with Derek. It all pretty much, in my experience, tends to feel like a playground.”

The View from Here is a poem and an ode to cinema and the “wild wide screen” that Swinton has written especially for our April 2020 issue. In it she writes about her fervent belief in cinema’s longevity, the ability of film to transcend national boundaries but also how she hopes the “mighty streaming services” will be “galvanised to restore, support or build great big screens”.

Beyond our cover feature, there is a smorgasbord of riches that testify to Swinton’s vision: we talk to Czech director Václav Marhoul about The Painted Bird, his searing portrait of a boy trapped in the violence of Eastern Europe during World War II.

We also explore Levan Akin’s tender love story And Then We Danced, an intoxicating celebration of Georgian culture and a defiant challenge to homophobia in the country.

Cult director Richard Stanley resurfaces almost 25 years after his career hit the skids, and we couldn’t resist talking to him about Color out of Space, a sci-fi horror tale starring Nicolas Cage, based on a story by horror writer H.P. Lovecraft. Meanwhile Roger Luckhurst explores how Lovecraft’s tales of metaphysical dread have found increasing favour with a new generation of filmmaker And as Roger Deakins’s Oscar wins only confirm what people already knew: that the British cinematographer is one of the greatest artists of light and shade in movie history, we select ten shots that show off his genius.

Elsewhere, we report from Sundance, interview Cary Fukunaga about bringing 007 into the Brexit era, talk to Todd Haynes about Dark Waters and his love of whistleblower films and trek down to Dungeness to report on an appeal to save Derek Jarman’s Prospect Cottage. Meanwhile, we review all the month’s new cinema releases, including Kleber Mendonça Filho and Juliano Dornelles’s Bacurau, Koreeda Hirokazu’s The Truth, suburban horror Vivarium and Dogs Don’t Wear Pants.

We also catch up with the latest Blu-ray releases – including a new box set of Abbott and Costello’s films for Universal Studios – spotlight the highlights from new TV and streaming, including hit Indian series about a wedding planning agency, Made in Heaven.

Plus all the usual great regular features.