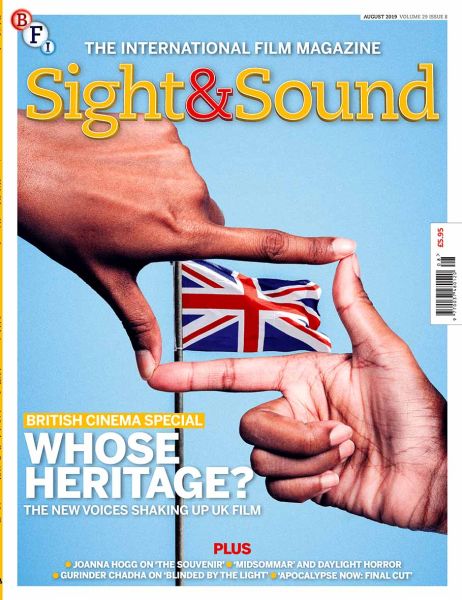 Our British cinema special issue talks to Gurinder Chadha and Sarfraz Manzoor about Blinded by the Light, and Joanna Hogg on The Souvenir; explores the multiculturalism of British heritage cinema; profiles new British talents; and prospects the future of the British film industry with the head of the BFI Film Fund

In this month’s British Cinema Special, we highlight where and how the huge variety of voices that now make up the British film scene come through, and what kinds of heritage are being explored. British cinema has always been a site for passionate political and cultural debate, particularly about heritage. In recent years, however, there have been few major public rows – perhaps because of the negative media dominance of Brexit and the relentless charge of new film releases keeping commentators on the back foot. The locus of change has been more fragmented, the scene has become quieter and more decentralised. But by looking right across the range of what’s being made we think we’ve captured a key moment in the evolution of what British cinema means.

Starting, so to speak, at the top, we chart the rise and rise of Gurinder Chadha through her new film Blinded by the Light, an adaptation of Sarfraz Manzoor’s memoir of being a teenage British-Asian Springsteen fan, and her primetime TV series Beecham House, which explores the Raj from both sides at the point of its dissolution. In our in-depth interview, Chadha explains her focus on identity and the need in her work to appeal across different cultures. Sarfraz Manzour also writes about his experience of being adapted.

Of equal prominence but with a more oblique aesthetic approach comes Joanna Hogg with her new film The Souvenir. This first of two linked semi-autobiographical films portrays a slow-burn romance that blossoms between a young woman film student and a mysterious older man she meets at a party. This affair is built out of awkward intimacies, a shared taste for opulent refinement and a hint of mad love taking place in a placid domestic milieu, and the film tackles issues of Britishness and class head on. Nick James visits the film’s set, reflects on Hogg’s career so far, and interviews Hogg as she’s shooting Part Two.

Whose heritage does British cinema now represent? Asking the question means looking, as Will Massa does in his essay No Place Like Home, at the people of colour born in Britain who’ve made existing films in their parents’ country of origin, such as Rungano Myoni’s I Am Not a Witch, Sarmad Masud’s My Pure Land, Babak Anvari’s Under the Shadow and Naji Abu Nowar’s Theeb. But it also means new films like Mark Jenkin’s spiky tourism impact assessment Bait, William McGregor’s folk horror Gwen, Shola Amoo’s forthcoming The Last Tree and Harry Wootliff’s anti-romantic couple drama Only You, all of which we profile.

Rounding off our special is an interview with BFI Film Fund head Ben Roberts, in which he outlines the strategic priorities for British film’s future.