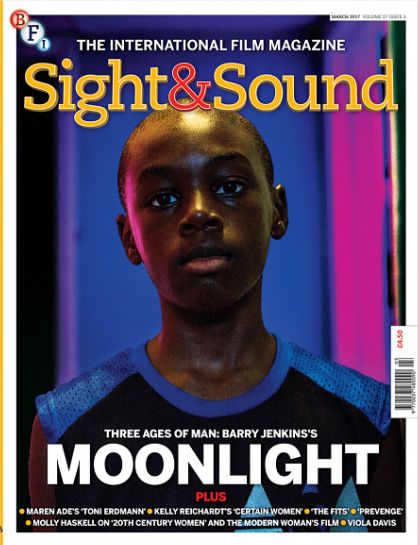 In these troubled times, Moonlight is a beacon of hope. Barry Jenkins’s lyrical triptych is a beautiful first-person odyssey about growing up growing up gay, black and poor in Miami. It already felt like vital, urgent cinema in the wake of the Black Lives Matter movement. But with the ascendency of the hyper-white-masculine Trump administration and its recent ‘Muslim ban’, Moonlight has become even more the film of the moment.

In a two-part interview conducted as Moonlight’s reputation grew and grew, Jenkins talks at length about this personal project, why he didn’t want to make a neorealist or miserable story out of Tarell Alvin McCraney’s play and how instead with this immersive, visually hypnotic film he’s used “the aesthetics of filmmaking to tap into the subconscious”. Meanwhile in this month’s editorial, Nick James makes a case for why, in this awards season, films like Moonlight should loom larger than the escapist fantasy La La Land. And in his monthly column Mark Cousins delves into cinema’s past in search of a film that mirrors “the slippery sickness of our political times”.

Our other features focus on no less timely subjects: Viola Davis, an actor who has long stolen scenes from the sidelines and who is now finally getting her due; Maren Ade, who with her unmissable comedy Toni Erdmann, has made a melancholy, intricate portrait of a father-daughter relationship and a biting critique of corporate capitalism and the condition of Europe; Kelly Reichardt’s Certain Women, an impeccably sketched study of four Montana women and another film alongside Toni Erdmann and Moonlight that topped our Best Films of 2016 poll; and Mike Mills’ 20th Century Women, in which, argues Molly Haskell, Annette Bening reigns supreme playing a single mother in the era of Jimmy Carter.

A note to the Academy: this is what the Oscar winners should look like.