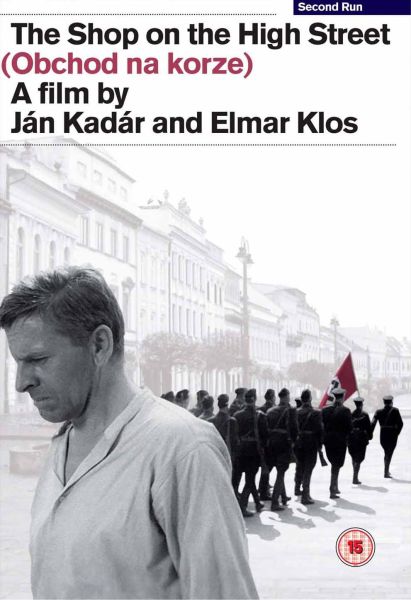 The Shop on the High Street

Made in 1965, this Czechoslovak film is set in the German-occupied, 'independent' Slovak state during World War II.

Antonin Tono Brtko is a poor carpenter appointed by his Nazi brother-in-law to be 'Aryan controller' of an old Jewish widow's sewing shop in an occupied Slovakian town in 1942. The widow, Rozalie (Yiddish theatre legend Idá Kaminská, nominated here for a Best Actress Oscar for her performance) is hearing-impaired, isolated and partially sighted. Barely even registering there is a war going on, she fails to fully realise the the context in which she lives.

Believing Tono is simply her new assistant, the two develop a tentative friendship that sees him attempt to protect her from the encroaching Nazi horror.

Directed by Ján Kadár and Elmar Klos, The Shop on the High Street is a complex political morality tale of common lives disturbed and destroyed by war. A story of loyalty, betrayal, cowardice and heroism, it is a scathing exploration of how minor compromises can lead to complicity in the horrors of fascism, asking the viewer: 'If it had been you, what would you have done?'