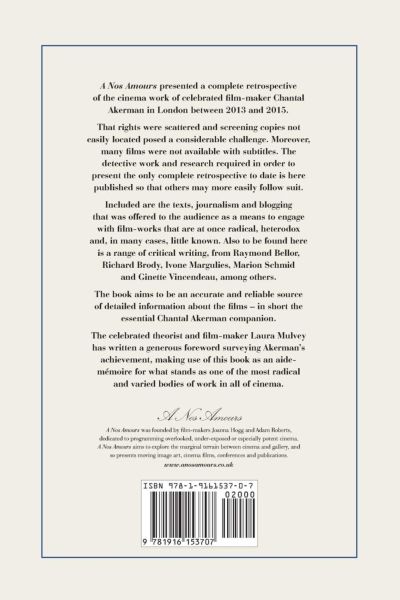 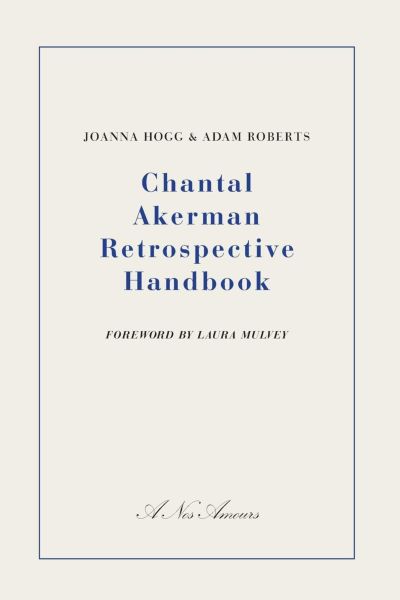 This book from A Nos Amours gathers up all the research and writing that went into making the London Chantal Akerman retrospective possible.

Between 2013 and 2015, A Nos Amours presented in London a complete retrospective of the films of the celebrated film-maker Chantal Akerman. This was not easy as rights and screening copies turned out to be widely scattered and difficult to access. The research needed to present this retrospective is offered in this book so that others may easily follow suit.

Also included are the texts, journalism and blogging that was offered to the audience as a means to engage with film-works that are at once radical, heterodox and, in many cases, little known. The book aims to be accurate and a reliable source of detailed information about the films.

Laura Mulvey has written a foreword, surveying Akerman's achievement, making use of this book as an aide-mémoire for what stands as one of the astonishing bodies of work in all cinema:

"As a collage of writing of many different kinds, the Handbook crucially bears witness to the effect that Akerman has had on the film community, from her earliest movies until her last... The high quality of the texts included in the book are all a reminder of the way that her ‘cinematic’ qualities have advanced our understanding of film."