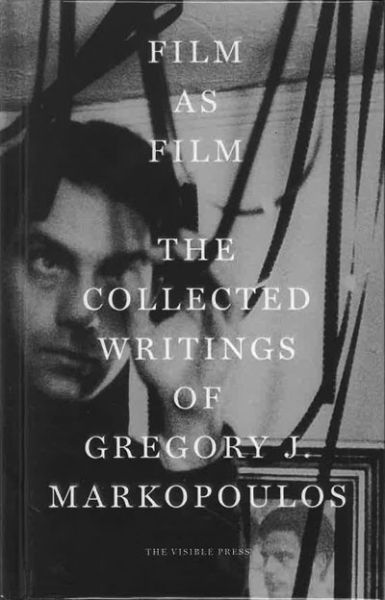 Film as Film: The Collected Writings of Gregory J. Markopoulos

by Gregory Markopoulos edited by Mark Webber with a foreword by P. Adams Sitney

Film as Film: The Collected Writings of Gregory J. Markopoulos contains some ninety out-of-print or previously unavailable articles by the Greek-American filmmaker who, as a contemporary of Kenneth Anger, Stan Brakhage and Andy Warhol, was at the forefront of a movement that established a truly independent form of cinema.

Beginning with his early writings on the American avant-garde and auteurs such as Dreyer, Bresson and Mizoguchi, it also features numerous essays on Markopoulos’ own practice, and on films by Robert Beavers, that were circulated only in journals, self-published editions or programme notes.

The texts become increasingly metaphysical and poetic as the filmmaker pursued his ideal of Temenos, an archive and screening space to be located at a remote site in the Peloponnese where his epic final work could be viewed in harmony with the Greek landscape. Gregory J. Markopoulos is a unique figure in film history, whose life’s work stands in testament to his strength of vision and commitment to the medium.

About the Authors: Gregory J. Markopoulos  (1928-92) is acknowledged as one of the pioneers of independent and avant-garde cinema. His films, which include Twice a Man (1963), Ming Green (1966), The Illiac Passion (1967) and Eniaios (1947-91), are in the permanent collections of the Museum of Modern Art (New York), Centre Georges Pompidou (Paris) and the Austrian Film Museum (Vienna).

P. Adams Sitney is a Princeton University professor and widely published critic. His Visionary Film: The American Avant-Garde, first published by Oxford in 1974, remains the definitive historical text on the subject. He is also the author of Modernist Montage, Vital Crises in Italian Cinema, Eyes Upside Down, and The Cinema of Poetry (forthcoming, including a chapter on Markopoulos), and editor of The Film Culture Reader, The Essential Cinema, and The Avant-Garde Film.

About the Editor: Mark Webber is a film curator based in London, who has been responsible for major screening events or touring programmes hosted by institutions such as Tate Modern, LUX and ICA (London), Whitney Museum (New York), Centre Georges Pompidou (Paris), Kunsthalle Basel, Oberhausen Kurzfilmtage, IFFR Rotterdam and many international festivals, museums and art centres. He was a programmer for the BFI London Film Festival from 2000-12, and is the editor of Two Films by Owen Land.