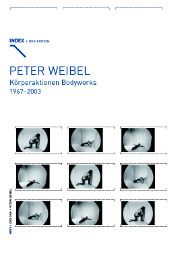 "Most performance artists developed their actions from painting, or to be more precise, from action painting, to which they also remained visually and conceptually bound. My performances differ from other actions performed in the 1960s, for instance in Vienna and California, firstly, through their relation to media and secondly, through their relation to politics. Writing and the typewriter, photography, film and video are media and apparatus that enable a new écriture corporelle, a new body politics that is simultaneously a critique of traditional forms of representation as well as identity politics.

The body image realized in my actions and video documents show the body in the age of its constructability via media and gene technology – not as a matter of nature but as a cultural product – for example, in questions of gender. The body is an alphabet; its organs constitute its letters. In a continuation of Antonin Artaud’s differentiation between bodies without organs and organs without bodies, a body image is formulated prematurely that in fact first becomes theoretically elaborated in the deconstructive philosophy of Gilles Deleuze and Félix Guattari, for example.

My body actions interpret the body on a horizon of transitional objects (Donald Winnicott) and partial drive. As a partisan of partial drive, unlike classical body artists I did not only search for the emancipation of the body, for instance through the sexual revolution. Above all, my idea was liberation from the body through media and technology. My goal was emancipation from the prison of the body, the prison of a society that colonizes the body and holds it hostage. For this reason I created body actions about the Utopia of the upright walk, because with the upright walk the human became “the first emancipated being in creation” (Johann Gottfried Herder, Ideas for the Philosophy of History of Humanity (1784–1791). Through my body configurations and body constellations, I intended the natural morphology of vertebrates and their organs to trans-form into a logical calculation of variables, an association of operations, to ultimately deliver humanity from the bondage of nature, precisely through the liberation from the body that appears to us as pure nature." - Peter Weibel

Peter Weibel: Born 1945 in Odessa, Ukraine. Studied French, film and comparative literature for a year in Paris before transferring to medicine in Vienna in 1964, later changing to mathematics specialising in logic.