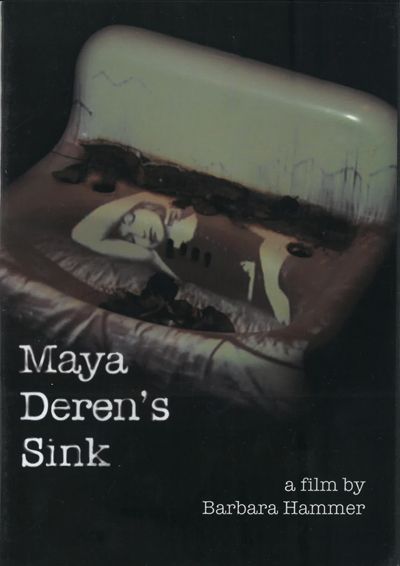 "And what more could I possibly ask as an artist than that your most precious visions, however rare, assume sometimes the forms of my images." Maya Deren

Maya Deren's Sink explores Deren's concepts of space, time and form through visits and projections filmed in her LA and NY homes. Light projections in Deren's intimate space evoke a former time and space providing entree into the homes of an influential filmmaker we will never know. The film reclaims the spaces that inspired her work in order to share it with audiences. Time and space are collapsed as film locations of the 40s are re-imagined in the present.

Performances by an actor based on Deren's film and writing as well as overlooked biographical insights reveal a creative personality untouched by convention. Voices from the past speaking from doorways, windows and picture frames include the current LA and NYC home owners, Teiji Ito's second wife, Judith Malvina, Carolee Schneemann, Ross Lipmann and others. Through collapsing time and extending space, a unique architectural portrait of the artist is created.

"Deren is often referred to as the archetypal example of independence, a filmmaker who managed to avoid the institutional regulation of American cinema. Deren screened her films on her living room walls to interested audiences, occasionally exhibiting to critics like Manny Farber and James Agee. Her aim was to inspire a new generation of avant-garde filmmakers.
Much of my own moving image work has been reconfiguring lost histories, often of women, and bringing them to life again through experimental film. Forty years ago as a student in a Film History class I saw Meshes of the Afternoon and knew I should and could make film. My interest in Deren was reawakened last year when Sally Berger, Assistant Curator, Department of Film, at The Museum of Modern Art in New York City tapped into my Deren research and selected my first 16mm film I Was/I Am for an upcoming exhibition opening May 15, 2010 that focused on women filmmakers in the permanent collection who were influenced by Deren, Maya Deren's Legacy: Women and Experimental Film.
I have for years wanted to establish Deren's NY home at 61 Morton Street as a historic building, and, like so many fans, was desirous of visiting her Los Angeles bungalow where she and Alexander Hammid shot Meshes of the Afternoon. [...]
It seems so right that I return to Deren and her homes to access the private spaces known only through her films. I hope to 'open doors' for others who may not know her work so well. By re-projecting the architectural details from her films back onto the ceilings, walls, floors, cabinets and windows of her homes I call forth her creative spirit and invite viewers, who like me, might have a similar driving curiosity to visit and walk inside the homes where Deren scripted, shot, edited." - Barbara Hammer

Please note that this DVD is for private home use only, if the order is for an institution please contact the estate of Barbara Hammer directly: Barbara Hammer DVD.

Welcome To This House (DVD)