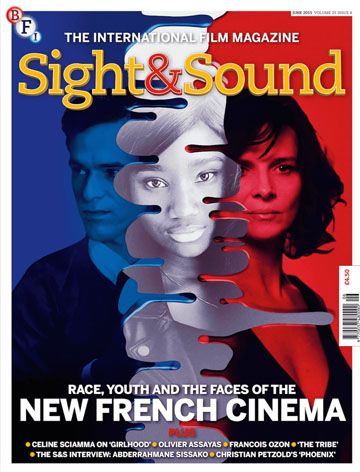 Céline Sciamma’s terrific Girlhood and the new face of French cinema – plus Clouds of Sils Maria and The New Girlfriend, sign-language cinema in the Ukrainian sensation The Tribe, Christian Petzold’s vertiginous postwar melodrama Phoenix and the S&S Interview with Abderrahmane Sissako.

In the 20 years that separates La Haine from Girlhood, a great deal has changed in the representation of multiculturalism in French cinema, and after decades of marginalising non-white segments of the French population, local ﬁlms are ﬁnally engaging with them. By Ginette Vincendeau.

Plus: Girls in the hood

Céline Sciamma’s Girlhood paints a complex portrait of a young black teenager in the banlieues, part of the director’s filmic project to portray the multiplicity of what it is to be female. By Thirza Wakefield.

François Ozon’s The New Girlfriend, an ingenious, twisty tale of love, death and sexual desire, has immense fun undermining viewers’ expectations, starting off as a Chabrol-style thriller before morphing into a hybrid that merges elements of romance, farce, melodrama and even musical. By Jonathan Romney.

When Juliette Binoche asked Olivier Assayas to write a film for her, he presented her with Clouds of Sils Maria, a knowing, bitterly witty drama about a successful actress tackling the insecurities of ageing and the rivalry of young starlets looking to claim her throne. Introduction by Nick James, interview by Neil McGlone.

A concentration camp survivor, her face altered by surgery, returns to the ruins of postwar Berlin to track down her husband, in Christian Petzold’s Phoenix, a complex melodrama with a clear debt to Hitchcock’s Vertigo. By Neil Young.

Myroslav Slaboshpytskiy’s extraordinary The Tribe is a brutal, unsentimental drama about the criminal antics of a group of pupils at a deaf school in Ukraine – and a film that turns the tables on the hearing public by taking place entirely in sign language, without subtitles. By Jonathan Romney.

The Mauritanian director’s latest film, Timbuktu, blends politics and poetry in a lyrical examination of the brutal repercussions of the jihadist takeover in the north of Mali. Here he discusses the condescending attitude of Western media to events in Africa, the pleasures of slow cinema, the importance of emotional honesty and why, on screen, a whisper can often convey more than a scream. Interview by Geoff Andrew.

The Beat Beneath My Feet
Big Game
The Canal
Child 44
Clouds of Sils Maria
The Connection
Danny Collins
The Dead Lands
Fast & Furious 7
A Fuller Life
Futuro Beach
Get Hard
Girlhood
The Goob
Home from Home: Chronicle of a Vision
Honeytrap
Lambert & Stamp
Lost River
Man Up
The Man Who Saved the World
Moomins on the Riviera
The New Girlfriend
Paul Blart: Mall Cop 2
Phoenix
Pitch Perfect 2
Rosewater
A Royal Night Out
Spooks: The Greater Good
Spring
Still
The Supreme Price
Timbuktu
Tokyo Tribe
Top Five
The Treatment
The Tribe
We Are Monster
Woman in Gold