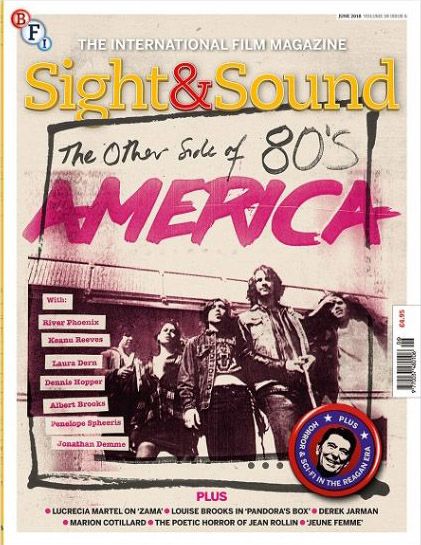 Be the first to review this product
£4.95
Darkness on the edge of town: films from the underbelly of 1980s America. Plus Marion Cotillard, Lucrecia Martel on Zama, Louise Brooks in Pandora’s Box, Jean Rollin, Derek Jarman, Jeune femme and more.
Details
Additional Information
Customer Reviews
Details

This month’s cover feature is also the Deep Focus special, transporting the reader back to the Other Side of 80s America – namely, those often overlooked films and directors that turned their back on the high-concept spectacle and cartoonish action film, the flag-waving and corporate swagger, preferring to operate in a low-key, personal register more reminiscent of the character-driven films of 70s New Hollywood and to focus their attention on marginal lives at the sharp end of Reaganonics. Dennis Hopper, Penelope Spheeris, Alan Rudolph, Joyce Chopra, Bill Sherwood, Joan Micklin Silver and Albert Brooks are just a few of the names to conjure with in this anti-pantheon, all profoundly committed to the oblique angle, the real thing, the downbeat tone.

Nick Pinkerton’s article points to the 80s as a watershed in American culture, before the internet blurred subcultural distinctions and ‘indie’ became big business. “The 80s seem like the last moment when the mainstream-counterculture dynamic that had acted to define postwar American culture offered a clearly comprehensible narrative and counter-narrative. Hair metal or college rock? Multiplex or cult cinema? What side are you on?”

Pretty much all of the characters in these films regard mainstream life as something to be escaped at all costs, a burden to cast off, they feel ill at ease in their time. This was never more true than for young people, whose bleak prospects in this era can be ascertained by the post-shoot body count on Martin Bell’s documentary about homeless youths Streetwise (1984). And it was largely down to the alternative cinema that Pinkerton explores to convey the devastation wrought by the spread of HIV/Aids in this era.

Anne Billson’s supporting article develops the thesis in the direction of subversive low-budget genre fare “unburdened by notions of good taste” – think Brian Yuzna’s Society (1989), James M. Muro’s Street Trash (1987), and of course the maestro himself, Larry Cohen, in films such as Q: The Winged Serpent (1982) and The Stuff (1985).

Zama is the long awaited new feature from Argentinian Lucrecia Martel, an anti-epic of frustrated colonialist ambition which many critics have argued is her greatest film to date. Zama is adapted from a 1965 novel by Antonio di Benedetto and follows an 18th-century colonial bureaucrat desperate to escape the brilliantly evoked tedium of his post in Paraguay. In Martel’s version of this story, as Jonathan Romney explains, the titular Zama “becomes much harder to read. He becomes a taciturn, somewhat opaque figure, knowable above all through the nervy body language and expressions of the lean, hollow-eyed Daniel Giménez Cacho.”

As usual with Martel, the psychological vicissitudes of her characters are expressed through disorienting technique – ellipsis, withheld information, partial views and manipulation of sound. It makes for, as Romney says, ‘tantalisingly murky waters’. In an interview with our editor Nick James, Martel says that for her, “a film is not telling a story, it is an artefact or representation of a way of perceiving things which aims to challenge one’s own way of perceiving the world, so as to upset things, like an earthquake.” Prepare to be rocked and shaken.

Marion Cotillard is, of all the famous French actresses one can think of, the only one to become a truly transnational star, claims our expert Ginette Vincendeau, owing to the sheer range of work she has under her belt, including domestic comedies, Hollywood blockbusters, American independents, music videos and films by respected European auteurs, such as her latest, Arnaud Desplechin’s Ismael’s Ghosts. She also won an Oscar for her role as Edith Piaf in La Vie en Rose, the film that turned her into a global celebrity.

So what’s the secret of her success? According to Vincendeau, “her agency as an actress is evident from the consistency of her performance style across different genres, roles and languages… her acting is characterised by understated features and naturalistic mannerisms designed to project subtle emotions. Her persona is primarily melancholy, bittersweet.” So one of the great stars of the modern age, and as one journalist put it to Cotillard, “You are a French exception all to yourself.”

To celebrate the re-release of GW Pabst’s Pandora’s Box and a new BFI Classic book on the film by Pamela Hutchinson, we look back at the female characters in the silent and early sound films of the Austrian director, who was fascinated by female psychology. As Hutchinson reveals, “His women are rebellious, sexual, intelligent and often outrageous, but always credible and intriguing instead of mere types. In Pandora’s Box, for example, the sexual monster of Wedekind’s plays is reconfigured as a human, sweetly innocent character.”

Perhaps Pabst was reflecting his moment, the rise of the new woman in 1920s Weimar, who formed the majority of the cinema-going audience. His vision, not of a future equality but of vengeful goddesses creating a sexual tyranny, was sadly disrupted and thrown into reverse by the rise of the Nazis in the early 30s. But let’s be grateful for this run of amazing films before the cataclysm.

Our Home Cinema section features Jean Rollin, gradually transforming into a cult director nowadays, whose genre films, filled with “wanderers, fugitives and seekers”, as Nick Pinkerton puts it, were dismissed in his native France. “They are some of the loneliest films I know… true outsider movies, both in their content and the circumstances of their production.” Rollin was most famously associated with the vampire film, but never went in for traditional scares. “Rollin’s foremost aim is not to terrify but to seduce, entrance, narcotise.” You can catch some of these 70s masterpieces and curios on BFI Player, and Black House Films are overseeing new UK Blu-ray releases.

Also in this issue: long reviews of Jeune femme and the Godard biopic Redoubtable, the early films of Derek Jarman box set, an exploration of sleep in cinema, and the enigmatic finale of Antonioni’s The Passenger.