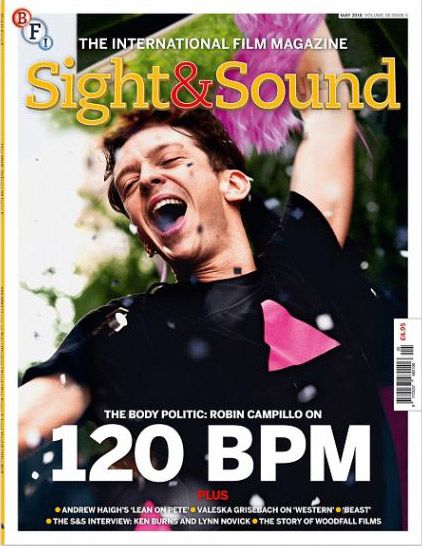 Be the first to review this product
£4.95
120 BPM salutes the courageous Aids activists of the early 90s. Plus, we ask why our finest filmmakers are heading to America, Andrew Haigh talks to us about his beguiling Lean on Pete, we remember how Woodfall Films broke new ground in British cinema and Ken Burns and Lynn Novick discuss their epic documentary The Vietnam War.
Details
Additional Information
Customer Reviews
Details

How to survive a plague? The title of David France’s documentary account of the the HIV/Aids crisis that tore through the queer community in the 1980s and early 90s United States, and the direct-action activism and self-organising that ensued in the face of official indifference, equally applies to 120 Beats Per Minute, Robin Campillo’s fictionalised retelling of the comparable life and death dramas played out in France at the same time. Tracking a dozen-odd members of Parisian Act Up through a series of spectacular political interventions and planning meetings, as well as charged scenes of dance, sex, illness and death, the film, writes Ben Walters in his review, “is a collective story about collective action, willing to sit with dissensus, ambiguity and irresolution, and all the more enthralling and devastating for it. As a period piece, it’s revelatory. As a call to arms, it’s galvanising.”

In our cover interview, Roger Clarke talks to Campillo about his memories of the movement’s energy and iconography (“We were creating images – we were directing ourselves”) as well as its heightened, confusing passions, how he combined unwanted experience with the mise en scene of William Wyler’s The Little Foxes to film death, and the influence of Jimmy Someville on the sound editing. Overleaf, Simon McCallum retraces the story of cinema’s own opening up to the realities of “one of the worst pandemics in history”, from early distress calls like Arthur J. Bressan’s Buddies (1985) and Bill Sherwood’s Parting Glances (1986) to more celebrated latter-day fiction and nonfiction movies from north America, Britain and France to Israel.

“Is it possible that contemporary British stories are somehow too small for the big screen? Are there inherent limits to our cinematic imagination? Is it really up to domestic television to do the difficult work of national self-scrutiny?” asks Will Massa in his feature Atlantic Drift, pointing out a new pattern of leading lights of British independent filmmaking lately applying their talents to distinctly American stories and genres – he counts a dozen features made in the last five years, from You Were Never Really Here to Three Billboards Outside Ebbing, Missouri, Baby Driver, Free Fire, Hell or High Water, American Honey, 12 Years a Slave and Andrew Haigh’s new Lean on Pete, with more to come from Steve McQueen, Yann Demange, Carol Morley and Chris Morris.

“There are now several generations of film lovers (and filmmakers) who are likely to be more familiar with the topography and iconography of the United States than they are with those of their own country,” Massa worries, “or for whom the onscreen experience of class or black and Asian representation, for example, is filtered through an American prism rather than the distinct configurations playing out within their own borders. Cinema can take us there, but all too often it is taking us there.” Thankfully there are hopeful counterexamples – but if there was ever a moment for our best artists to be helping us plumb the British psyche, it’s surely now.

“It’s amazing how you can get pigeonholed and labelled by the critical community,” says Haigh in turn. “When Weekend came out, it was: “Oh, he’s the gay filmmaker”; then 45 Years came out, and there was this understanding that I was going to tell British stories about British situations. That has never been my intention. I care about character above all. Lean on Pete may seem like a very different film, but how I feel about Charley is how I felt about Kate in 45 Years or about Russell in Weekend. They are all struggling with similar things, with loneliness, with trying to understand how they can find some kind of meaning or purpose in their life, in order to make themselves happy.” Haigh talks to Michael Leader about filming loneliness in his adaption of Willy Vlautin’s portrait of an unsheltered boy and a worn horse’s reversal of the Oregon trail in search of security and safety – and about building confidence, trusting in the lived-in quality of veteran actors, and the importance of endings.

“There’s something about returning to the place that you’re from; whether that be a literal biographical film, or just the landscape and the atmosphere,” Michael Pearce tells Nikki Baughan. His bold, visceral thriller debut Beast is shot in his childhood landscape of Jersey, and complements the recent British ‘farm trilogy’ of The Levelling, God’s Own Country and Dark River in its raw, defined sense of (non-cosmopolitan) place, reimagining a folkloric Jersey trauma from the 1960s – the ravages of the Beast of Jersey – as a properly primal fairytale of a woman in the wild woods of an ambiguous romance. “It had to feel like it could have been shot on the Serengeti, with wild animals,” says Pearce. He and producer Ivana Mackinnon talk about redefining ‘strong’ female characters, avoiding psychosexual and procedural clichés, and finding fortune in natural and financial afflictions.

“Ealing, Gainsborough, Hammer, Powell and Pressburger’s The Archers: all of these British film companies deserve their place in cinema history. But in terms of national and international impact, Woodfall Films – subject of the forthcoming 17-film BFI retrospective and accompanying eight-film Blu-ray box-set – is no less deserving of a position in the pantheon,” writes Neil Young, introducing his history of the under-celebrated company formed to bring John Osborne’s Look Back in Anger to the screen, which went on to bolster not only first-time director Tony Richardson’s subsequent career but to define the new wave of British ‘kitchen sink’ classics – Saturday Night and Sunday Morning, A Taste of Honey, The Loneliness of the Long Distance Runner.

The company made a grand total of 21 titles – spanning further hits (Tom Jones, The Knack… and How to Get It, Kes, O Lucky Man!), misses (The Sailor from Gibraltar, Ned Kelly), films wrongly maligned or neglected (Mademoiselle, Laughter in the Dark) and the plain eccentric (The Hotel New Hampshire). As director Karel Reisz remembered, “They were all made by writers who had never written, directors who had never directed, and actors who had never acted, and so on, all the way down the line” – and as Young adds, actors “from the far-flung corners of the British Isles and the lower rungs of the socio-economic ladder,” fitting them to a story template “of an upstart lower-class outsider seeking to find his way in a rigidly class-bound society”.

“It’s the easiest thing in the world to claim that a film set in the present day, in America or elsewhere, is ‘really’ a western: usually all that’s needed is a stretch of landscape, and a weather-beaten male face or two, and the comparison can be made to stand well enough,” begins Jonathan Romney. “But Western – the long-awaited third film from German director Valeska Grisebach – fits its title in so many ways that it comes across as virtually an arch-western, despite being set in Eastern Europe.” Eleven years after her last film, Grisebach unfolds her identification with (and attraction to) loner masculinity, the politics of Westerners in Eastern Europe and her insistence on withholding her film scripts from her carefully gleaned non-professional actors.

“Unlike most of their documentary contemporaries, the challenge for considering the work of Ken Burns and his frequent producing and directing partner Lynn Novick isn’t simply to get people to watch” – people know about Ken Burns – “it’s to get people to realise the complexity and artistry of what they’re watching,” writes Eric Hynes. “Take another look at that big book on the shelf – you might find it odder and more provocative than you recall.” In a generous, hour-long conversation the two collaborators discuss “the work that time does” in the context of their latest history epic The Vietnam War, what makes someone interview-worthy, their pursuit of higher common denominators for an art that disarms and reconciles – and the question, now, of whether the American experiment is on the rocks.

Also in this issue: Custody director Xavier Legrand, Dennis Cooper, non-professional actors, Mark Cousins on men and musicals, the success of The Square, the ending of Lindsay Anderson’s If…. and yet more.