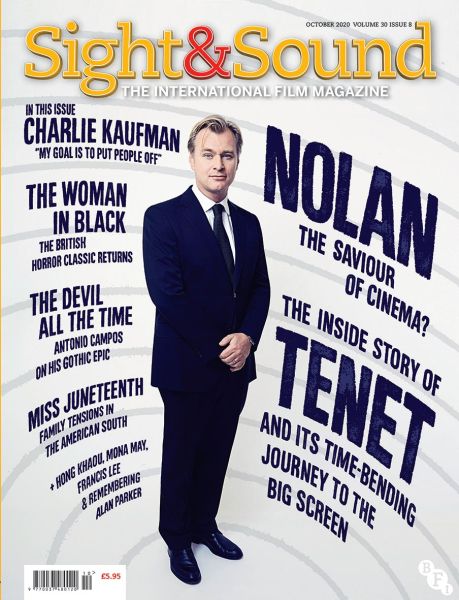 The inside story of Tenet; plus Charlie Kaufman, Miss Juneteenth, The Devil All the Time and Gloria Swanson in her own words

Our October issue runs the rule over Tenet, Christopher Nolan’s slippery fish of a time-twisting blockbuster and the movie Hollywood is hoping will save cinema as we know it. James Mottram goes inside Nolan’s dazzlingly ambitious high-concept film to ask if it can bear the weight of expectation.

Also in this issue, we talk to Charlie Kaufman about his new book Antkind and film I’m Thinking of Ending Things, to Antonio Campos about his adaptation of Donald Ray Pollock’s The Devil All the Time, to Channing Godfrey Peoples about his tenderly authentic debut Miss Juneteenth and to Lilting director Hong Khaou about his expat gay love story Monsoon.

We also look at the impact of coronavirus on both international archives and the box office for drive-in cinemas; road-test the BFI diversity standards; investigate the rich strain of anarchist cinema; bid goodbye to the late Alan Parker and Linda Manz; and reprint a classic 1969 interview with Gloria Swanson to mark the 70th anniversary of Some Like It Hot.

Editorial
Back to the future

Costume design: ensemble performance
As Clueless turns 25, Mona May explains how she created show-stopping outfits for the classic fashion-forward comedy. By Abbey Bender.

The new Diversity Standards for measuring representation on and off screen must go further in pursuit of equality. By Clive Nwonka.

Covid fallout: “Weeks of closure did their damage”
The coronavirus pandemic has had serious consequences for international archives and our global film heritage. By Isabel Stevens.

The numbers: Drive-in cinemas
This summer, exhibitors turned to vintage inspiration amid the privations of lockdown – but can they keep the motor running? By Charles Gant.

Political film: Against the rules
For Hollywood – as for Trump – ‘anarchist’ is often shorthand for violent agitator. But there is also a rich strain of anarchist cinema.

Primal screen: The neoreal deal
As both director and star of the 1915 Neapolitan melodrama Assunta Spina, Francesca Bertini was decades ahead of her time. By Tamsin Cleary.

Film of the month
She Dies Tomorrow

Television of the month
Lovecraft Country

plus reviews of
Disclosure
I Hate Suzie
Mrs America
The Plot Against America
A Suitable Boy
The Umbrella Academy: Season 2

Ghosts of Christmas past: The Woman in Black
This made-for-TV adaptation of Susan Hill’s terrifying novel has lost none of its power to paralyse its audience in fear. Reviewed by Trevor Johnston.

Audie Murphy Collection: The Duel at Silver Creek / Ride a Crooked Trail / No Name on the Bullet
Puppyish Audie Murphy made for an unlikely movie cowboy, but his soft face belied the instincts of a fierce combatant. Reviewed by Nick Pinkerton.

Lost and found: Blessed Event
Lee Tracy, forgotten star of the 1930s, lets rip as a scandalous gossip columnist in this fast and furious Pre-Code comedy. By Rick Burin.

Made Men: The Story of GoodFellas by Glenn Kenny (Hanover Square Press) reviewed by Christina Newland

Chasing the Light: How I Fought My Way into Hollywood: From the 1960s to Platoon by Oliver Stone (Monoray) reviewed by Nick James

Endings
Rashomon
The close of Kurosawa Akira’s 1950 classic shows that truth is as elusive and unknowable as the mysteries of the human heart. By Kambole Campbell.