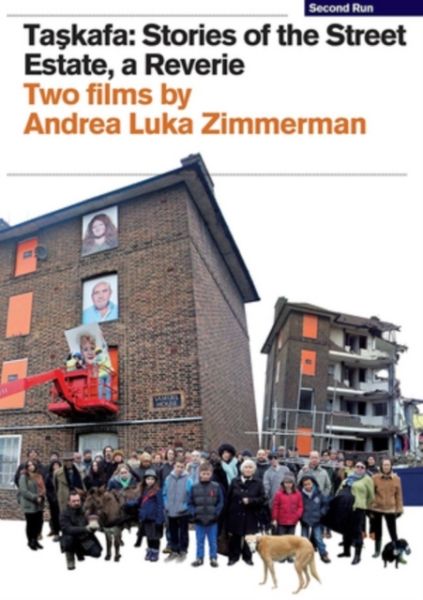 Taskafa: Stories from the Street / Estate, a Reverie (DVD)

Taskafa: Stories from the Street (2013) is an artist’s essay film about memory and the most necessary forms of belonging, both to a place and to history, through a search for the role played in the city by Istanbul’s street dogs and their relationship to its human populations. Through this exploration, the film opens a window on the contested relationship between power and the public, community and categorisation (in location and identity), and the ongoing struggle / resistance against a single way of seeing and being. Featuring text and readings by the late artist, novelist and poet John Berger.

Her feature documentary Estate, a Reverie (2015), now part of the Arts Council Collection, celebrates her community’s resilience in the face of the impending demolition of their east London housing estate and the passing of the utopian promise of social housing it once offered. Filmed over seven years, Estate reveals the determination of residents, asking how we might resist being framed exclusively through class, gender, ability, disability or geography to present a spirited celebration of extraordinary everyday humanity.

Artangel Open Winner, and the first director to be shortlisted for both the Grierson and Jarman Awards, the work of filmmaker, artist and cultural activist Andrea Luka Zimmerman presents tender portraits of community and solidarity. Her newest film Erase and Forget premiered at the Berlin Film Festival Panorama 2017, and screened at the 2017 BFI London Film Festival Experimenta strand.

All White in Barking / Men of the City

Someday My Prince Will Come / Philip and His Seven Wives