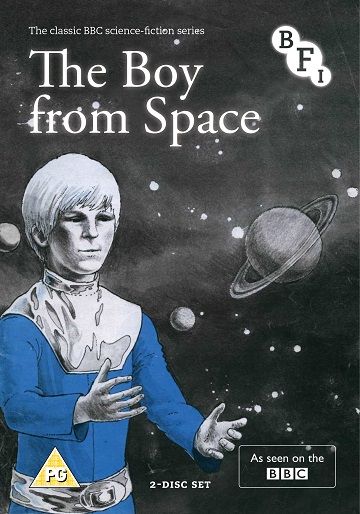 Unavailable in any video format since its original broadcast outings, the BFI DVD edition of the cult children’s science fiction series will delight its many fans.

The Meteorite | The Spinning Compass | The Man in the Sand-pit | In Danger! | The Hold-up | Where is Tom? | The Hunt for the Car | The Lake | Captured! | In the Spaceship

When brother and sister Dan and Helen see a strange object falling from the sky one night, they set out to look for traces of a meteorite in the nearby sand-pit. There, they are confronted by a strange thin man, and discovers a boy called Peep-peep who speaks a bizarre alien language.

Originally broadcast in 1971, as part of the BBC’s educational ‘Look and Read’ strand, The Boy From Space was shown again in 1980 in a revised version featuring new presenters Wordy and Cosmo, as well as updates – including a new forward and a voice-over – to the main drama.

This long-awaited DVD release presents the complete 1980 series along with extensive extras contains the original 1972 BBC Records recording of the story, and alternative presentations of the original TV drama which allow for Dan, Helen and Peep-peep’s adventures to be experienced in new and exciting ways.