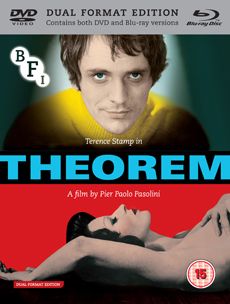 Released on Blu-ray for the first time in the UK, in this Dual Format Edition, the BFI presents Pasolini’s Theorem complete and uncut in a new high-definition digital transfer with restored picture and sound. It is accompanied by a new interview with Terence Stamp, and a feature commentary.

A handsome, enigmatic stranger (Terence Stamp) arrives at a bourgeois household in Milan and successively seduces the son, the mother, the daughter and the father, not forgetting the maid. Then, as abruptly and mysteriously as he arrived, he departs. Unable to endure the void left in their lives, the father (Massimo Girotti) hands over his factory to the workers, the son (Andrs Jos Cruz) abandons his vocation as a painter, the mother (Silvana Mangano) abandons herself to random sexual encounters, and the daughter sinks into catatonia. The maid (Laura Betti, winner Best Actress, Venice 1968), however, becomes a saint.

In this cool, richly complex and provocative political allegory, Pasolini uses his schematic plot to explore family dynamics, the intersection of class and sex, and the nature of different sexualities. After winning a prize at the Venice Festival, Theorem was subsequently banned on an obscenity charge, but Pasolini later won an acquittal on grounds of the film's ‘high artistic value’.

A visually ravishing film, with superb performances from all the cast, it also has a brilliantly eclectic soundtrack - with music ranging from Mozart and Morricone to the natural sound of chirping birds.