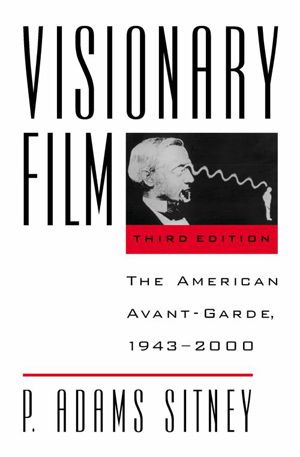 This title is available to order, please allow 7-10 days for delivery

Critics hailed previous editions of Visionary Film as the most complete work written on the exciting, often puzzling, and always controversial genre of American avant-garde film. This book has remained the standard text on American avant-garde film since the publication of its first edition in 1974. Now P. Adams Sitney has once again revised and updated this classic work, restoring a chapter on the films of Gregory J. Markopoulos and bringing his discussion of the principal genres and major filmmakers up to the year 2000.

"Without question it is the first such book on the avant-garde film--the first one that probes this field in such depth, with such perspective and vision, with such insight and intelligence." - Jonas Mekas, The Village Voice

"Extremely informative and dense with associations that give it an importance and interest beyond the immediate subject matter." - Vincent Canby, The New York Times

"It is an event of no small importance that a work has now appeared on personal film that ranks as a first-rate work of critical analysis, bearing comparison with the best criticism in more traditional media. This book signals a coming of age for the literature of personal film.... For those who have never been able to see the films discussed, Visionary Film creates a powerful motivation to do so." - Afterimage

Contents:
1. Meshes of the Afternoon
2. Ritual and Nature
3. The Potted Psalm
4. The Magus
5. From Trance to Myth
6. The Lyrical Film
7. Major Mythopoeia
8. Absolute Animation
9. The Graphic Cinema: European Perspectives
10. Apocalypses and Picaresques
11. Recovered Innocence
12. Structural Film
13. The Seventies
14. The End of the 20th Century
Notes
Index

About the Author: P. Adams Sitney is Professor of Visual Art at Princeton University.