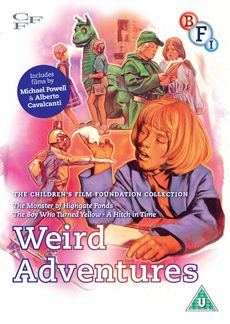 The BFI presents three more classic kids films from the much loved Children’s Film Foundation. This volume showcases weird and fantastic adventures, in three remastered films made by some of the leading figures of British cinema.

In The Monster of Highgate Ponds young David promises to guard a mysterious egg which his uncle brings back from Malaysia. But, when a baby monster hatches, mayhem ensues as David struggles to keep the unruly, but friendly, creature from falling into the clutches of two ruthless crooks. This enchanting tale features brilliant animated sequences by the legendary Halas and Batchelor, who also produced the film, and was directed by the celebrated Ealing director Alberto Cavalcanti (Went the Day Well?).

The Boy Who Turned Yellow is the splendidly eccentric final collaboration from the eminent filmmaking duo Michael Powell and Emeric Pressburger. London schoolboy John Saunders turns a bright yellow after losing his pet mouse on a school, trip. Is the mysterious colour change the result of an alien invasion or does the answer lie closer to home?

In A Hitch in Time Patrick Troughton (Doctor Who) plays time-hopping inventor Professor Adam Wagstaff. Discovered working on his time machine by two curious kids, Wagstaff decides to send them back through the ages. But, with malfunctions aplenty, will they be able to make it back? Featuring Jeff Rawle (Harry Potter and the Goblet of Fire) as Sniffy Kemp, the teacher out to spoil everybodys fun, A Hitch in Time is a riotous re-telling of history.

The Famous Five: Five on a Treasure Island (DVD)

The Famous Five: Five Have a Mystery to Solve (DVD)