Duffer & The Moon over the Alley (Dual Format Edition)
9.99 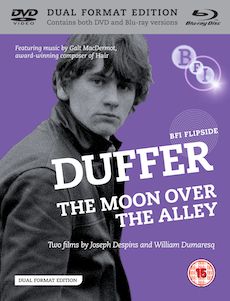 Duffer & The Moon over the Alley (Flipside 015) (Dual Format Edition)

Two films by Joseph Despins and William Dumaresq, one an intense and bizarre study of obsession, the other capturing the energy and spirit of London's Portobello Road

Duffer, an intense and bizarre study of obsession that is by turns beautiful and disturbing, tells the story of a teenage boy torn between the womanly charms of a kindly prostitute, and the sadistic attentions of an older man. Both whimsical and disturbing, with a quirky sense of the grotesque, Duffer is a film that defies easy comparison.

The Moon Over the Alley, equally unconventional, is a musical about the problems faced by the multicultural residents of a ramshackle boarding house, with magic realist musical numbers by Galt MacDermot, the award-winning musician and composer of the Broadway hit Hair. The Moon Over the Alley captures the human energy and community spirit of London's Portobello Road with a wit, strangeness and charm.