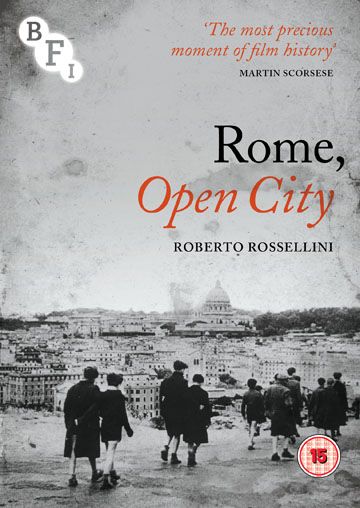 A landmark of Italian neorealism, and often cited as one of the greatest films ever made.

A landmark of Italian neorealism, and often cited as one of the greatest films ever made, Roberto Rossellini's portrait of life under the Nazi occupation remains remarkable for its immediacy, tension and power.

Made in extraordinarily straitened circumstances immediately after the liberation of Rom, the film follows Manfredi (Marcello Pagliero), a partisan leader, as he attempts to evade the Gestapo by enlisting the help of Pina (Anna Magnani), fiancée of a fellow member of the underground resistance, and Don Pietro (Aldo Fabrizi), the priest due to oversee her marriage. Both Fabrizi and Magnani were well known comedic actors and perform magnificently against type.

Shot both on the ravaged streets of the city and in the studio, Rome, Open City seamlessly blends sequences reminiscent of dcoumentary with more conventional dramatic scenes notable for their pace, precise staging and affectingly naturalistic performances. The power of this extraordinary film remains undiminished.

This ground-breaking film is the first part of Rossellini's celebrated War Trilogy (followed by Paisà and Germany Year Zero).