Scenes from Allen's Last Three Days on Earth as a Spirit - Jonas Mekas
16.99 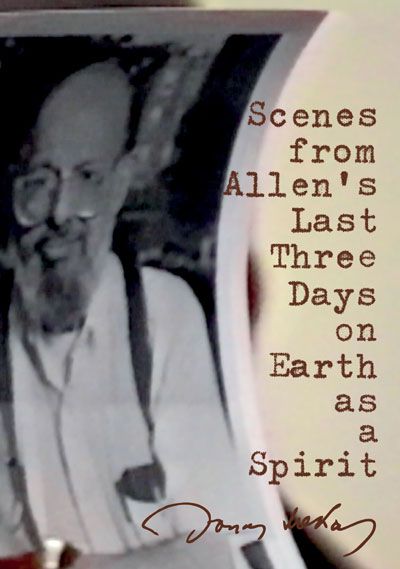 Jonas Mekas was born December 24, 1922.  He was a Lithuanian-American filmmaker, poet and artist who has often been called 'the godfather of American avant-garde cinema.' His work has been exhibited in museums and festivals worldwide. He was co-founder of the Anthology Film Archives in New York City.

"The video Jonas is bringing us today was shot in New York in 1997 during the three days following Ginsberg’s death, in the new loft into which he had recently moved, at the very spot where he died. It is the last encounter, troubled and troubling, between these two extraordinary and oversized minds, each of whom were able to forge a unique destiny." - Jean-Jacques Lebel

"This is a video record of the Buddhist wake ceremony at Allen Ginsberg's apartment. You see Allen, now asleep forever, his close friends, and the Buddhist monks conducting the ceremony, preparing Allen for the travel into the spirit world. You also see Allen being wrapped up and removed from the apartment to the Buddhist Temple. I talk to Peter Orlovsky about Allen's last days. Later I tape the final farewell at the Buddhist Temple, 118 West 22nd Street, New York City, and many of Allen's friends, Patti Smith, Gregory Corso, Peter Orlovsky, Le Roy Jones-Baraka, Hiro Yamagata, Anne Waldman, and many others who came to say last good-bye to Allen." - Jonas Mekas