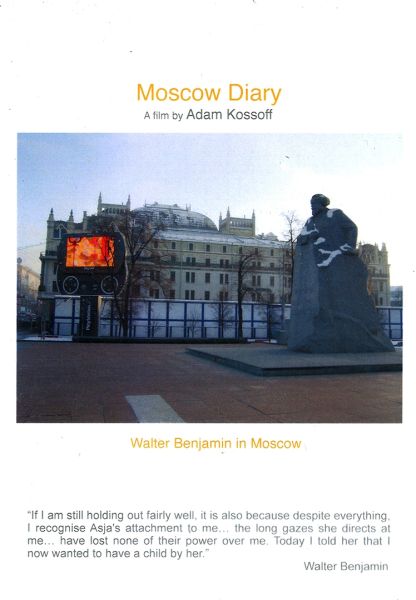 "Moscow Diary  is based on Walter Benjamin’s Moscow Diary. Filmed on a mobile phone, I took the role of a latterday flaneur, following the routes that Benjamin describes, going to the locations, filming what is still there, or what has replaced what was once there." - Adam Kossoff

“Adam Kossoff’s Moscow Diary (2010) …is consistently inventive and compelling… It is a video recorded entirely on a portable camera phone, retracing the steps of German cultural theorist and historian Walter Benjamin in his own account of the same name, written during a visit to the city in 1926-7. While a voiceover narrates passages from Benjamin’s text, the images function as occasional counterparts to the experiences being described, posing visual, sentimental and political rejoinders to the writer’s views. In order to appreciate the video’s aesthetic, one needs to accept Kossoff’s implicit claim that the camera phone both allows him to replicate the experience of 'being' in the city in a nonintrusive manner and represents a progression of some of Benjamin’s own thinking on the development of art and technology. This is not always a simple task, but some of Kossoff’s more poetic images—smoke emanating from a power plant and dissolving into pixilated blocks—do appear to work in this regard. A relation between irony and clarity that is reflective of some of Benjamin’s alternating relations between physical and emotional distance and proximity seems to be further reflected in Moscow Diary’s chosen mode and audiovisual aesthetic. Ultimately, Kossoff’s work is a kind of social and technological experiment that his subject and muse might have appreciated, and not the herald of a soon-to-come era when film festivals are viewed on individual devices in the comfort of one’s home, which comes as a kind of uneasy relief.” – Philip Cartelli, Film International

Adam Kossoff is an artist, filmmaker and writer. His moving image work addresses and questions the relationship of the moving image to different spatial and technological contexts. His single screen and video installation work has been exhibited nationally and internationally.

Not Our Darkness (DVD)

One Or The Other (DVD)